The HT-01B Magella Attack was the main battle tank of the Principality of Zeon's ground forces throughout the One Year War.

The Magella Attack was designed by the Principality of Zeon for use on Earth to support its infantry and mobile suits as a form of self-propelled artillery. It was composed of two parts: the hull, named the Magella Base, and the turret, named the Megalla Top. The Megalla Top's 175mm cannon was set high above the hull to facilitate long-range artillery fire, but it could not rotate. As a result, the entire tank had be moved in order to aim. The Magella Top also featured a simple canopy cockpit that gave the pilot, who doubled as the gunner, a wide view of the battlefield. The Magella Attack's most unique feature was the Magella Top's ability to separate from the Magella Base and fly using VTOL engines mounted in the wings on both sides of the turret. This enabled attacking ground forces from the sky and continued operation if the hull was destroyed. However, the accuracy of Magella Top's cannon was severely reduced while flying, and it only carried enough fuel to sustain flight for a few minutes.

There were several variants of the Magella Attack to suit different environments. The Magella Attacks deployed in the Southeast Asian and European fronts featured smoke dischargers, with the former also being armed with a coaxial gun. Although the Magella Attack was less effective against the mobile suits of the Earth Federation Forces, its main cannon could still destroy them with a well-placed shot. The Magella Attack's main gun was later repurposed into a handheld weapon for Zakus, and the Magella Base could be attached to the upper body of a Zaku to form the Zaku Tank, which was popular with Zeon forces that had a scarce supply of intact mobile suits.

The Magella Attack's main weapon was a 175mm cannon mounted in the Magella Top that was effective against lightly armored targets but could do little damage against mobile suits unless at close range. The stability of the tank's hull allowed the cannon to be fired even while moving without much impact on its accuracy, but its strong recoil could pose a risk when fired while the Magella Top was in flight. The 175mm cannon would later form the basis of the ZIM/M·T-K175C recoilless rifle, a hand-held weapon developed for the MS-06J Zaku II Ground Type.

A 3-barrel 35mm machine gun was mounted on the front of the Magella Base for use against infantry.

The Magella Attack's design was based on a Zeon tank simply known as M1.[1] It first saw action on March 1st, U.C. 0079, during the First Earth Landing Operation, alongside the Magella Eins.[2] For the remainder of the war, it would continue to serve as the main battle tank of Zeon's worldwide forces.

On September 23rd, the White Base reentered the atmopshere in North America entered combat with a Zeon air unit led by Garma Zabi. Garma's unit was soon joined by a mechanized unit deployed from a nearby base, which consisted of Magella Attacks.[3] Their ability to continue fighting even after the chasis is destroyed proved to be too much for the inexperienced pilot of the RX-77-2 Guncannon, Kai Shiden. However, they were quickly destroyed by the RX-78-2 Gundam after it joined the battle.[4]

Retreating to Ginias' Base; with Bone Abust saluting on top (08MST)

Magella Attack MBT advances with Zeon Infantry with a pair of Doms in the background (from Side Story 0079: Rise From The Ashes) 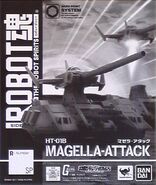 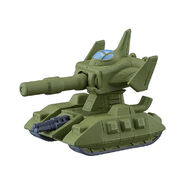