The HFA-78-3 Heavy Full Armor 7th Gundam was armed with heavy weapons designed to take out a single enemy fleet and is set to carry out assault operations with high efficiency and heavy firepower. The HFA-78-3 Heavy Full Armor 7th Gundam's concept is similar to the FA-78-1s Full-Armor System and Weapon System(FSWS) scheme, and is theoretically the ultimate development of the RX-78-7 7th Gundam. The equipment features a Long Range mega particle gun similar to a battleships main gun, allegedly powerful enough to sink a Musai Class light cruiser at long-range. In addition, in order to meet the needs of a variety of operations scenarios, it's equipped with various types of missile launchers, a Hyper Bazooka, long range cannons, grenade launchers and hand beam guns. Because the HFA-78-3s large body size and numerous weapons needed a considerable amount of energy to function normally, the design team for the Heavy Full Armor system developed a large-sized engine installation, fuel tanks and additional vernier thrusters for extra power and mobility.

Mounted in the head, these shell firing weapons have high rate of fire but little power and can't damage the armor of a mobile suit, though they can damage lightly armored areas such as the sensors. They are ideal for shooting down small, lightly armored targets such as missiles, attack vehicles, etc.

The standard close range armament for most Federation mobile suits. The beam saber is a small device held in the mobile suit's hands when operated and is powered by a rechargeable energy capacitor. It can cut through most armor not treated with anti-beam coating. The FA-78-3 has two beam saber stored in the backpack. One can be used as a reserve weapon, or both can be used simultaneously in a twin sword fashion.

A hand beam gun is mounted on each of the mobile suit's arms.

A quadruple missile pod is mounted on each side of the upper chest, with an upward firing angle.

A triple missile pod is mounted on each shoulder armor. In addition, the M-MSV design retains the missile pods on the side of each shin from the Full Armor 7th Gundam.

Four micro missiles are mounted on the mobile suit's back.

A giant mega beam cannon is mounted over the mobile suit's shoulder.

A swiveling cannon is mounted on each side skirt armor.

A custom-made weapon for RX-78-7, it has a longer range and a higher rate of fire compared to beam rifles from the One Year War era. Shares some parts with long range beam cannon.

Optional armaments that can be mounted on both forearms depending on mission requirements. Can be replaced by the twin grenade launchers.

Optional armaments that can be mounted on both forearms depending on mission requirements. Can be replaced by the twin beam spray guns.

In Gundam EXA, the Heavy Full Armor 7th Gundam appears in a flashback of EX-, who used it to join in battle of A Baoa Qu. Although EX- was confident that its power would allow him to gather the data on a Newtype, he only found the wreckage of the RX-78-2 Gundam, with the Core Fighter ejected. Frustrated at his failure, EX- and the Heavy Full Armor 7th Gundam start wreaking havoc without thinking. The commotion soon catch attention from Ford Romfellow and Luce Cassel, who recognize it and realize that it shouldn't exist there since the RX-78-7 7th Gundam is still under construction. This disturbance proved to be too great for General Answer to handle, and its record of the events was damaged beyond recover. 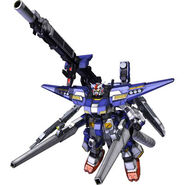