Leader of the armed forces of the Moon. Gym is a forceful, swaggering man who carries a katana as an affectation. He believes that humanity can only live up to its true potential during times of war, and seeks to use the Turn X to sow strife and re-kindle the brutal conflicts that raged throughout the Dark History.

Both Agrippa Maintainer and Guin Sard Lineford think that they can use Gym to their own ends, but they fail to understand his lust for battle. Ultimately, neither politician is able to control him.

Gym Ghingham appears in the video game Dynasty Warriors: Gundam 2 as the pilot of both the Musha Gundam and the Turn X. This marks the first time he appears in an English-language game. He serves as the endboss of Loran's story mode, piloting the Turn X and then immediately attacking Loran with the Musha once the Turn X is destroyed.

In his own story mode, he teams up with and then subsequently fights against Yazan Gable, who he shares a sort of kinship with due to their love of war. A random event midgame can trigger where both of them spawn in Musha Gundams and throw the battlefield into chaos.

Gym Ghingham appears in the video game Dynasty Warriors: Gundam 3 and pilots his trademark Turn X which has seen a large boost in ability since the previous game thanks to addtional charge attacks and SP moves being added.

Ghingham returns once more along with his Turn X as a playable character and mobile suit. A random midgame event has Ghingham sending out two random pilots after the player out of a desire for a fight, then challenging the player directly once both pilots are defeated. After defeating Ghingham, he'll join the player's forces (under the guise of the player being drafted into the Ghingham Fleet). 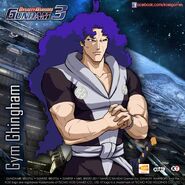