The Guul is a sub-flight system introduced in the anime Mobile Suit Gundam SEED.

An unmanned aircraft developed by ZAFT as a flight platform for mobile suits that cannot fly in the atmosphere, its official name is "Mobile Suit Support Aerial Mobile Flyer Guul". The Guul's wings are folded when not in use, making it more compact for storage onboard the Vosgulov-class submarine, etc. With its high thrust, the Guul is capable of vertical takeoffs and landings, as well as perform aerial maneuvers even while carrying a mobile suit on its back. The entire Guul, including the pair of 6-tube missile launchers, is remote controlled by the mobile suit carried on its back. The Guul was also capable of being used by mobile suits besides those constructed by ZAFT, including the Gundams of the Earth Alliance's G Project.

ZAFT created the Guul as an aerial combat platform for its mobile suits as it refuses to surrender air superiority to the Earth Alliance during the First Alliance-PLANT War. The Guul remained in use even after ZAFT had introduced the aerial mobile suit AMF-101 DINN, and was deployed in numerous battles, including Operation Spitbreak,[1][2] the Battle of Porta Panama, etc.

The Guul was still in active service during the Second Alliance-PLANT War, participating in the Battle of Heaven's Base,[3] Operation Fury, among many others.[4] 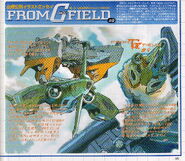