Gunpla Love (ガンプラLOVE, Ganpura Love?) is the name for a regular feature in Hobby Japan, involving customised models mainly by the modeller Seira Masuo, though yubaba, Miyuki UEHARA, GAA(firstAge) and others have also been featured. It is similar to the "ORE-Gun" series from the Mobile Suit Gundam SEED/Mobile Suit Gundam SEED Destiny era. Sometimes, such as with the Rebirth Gundam, an "in-universe" backstory is provided, however, unlike Mobile Suit Gundam 00V: Battlefield Record, Gundam Sentinel, Tyrant Sword of Neofalia and their ilk, there is no overarching story behind the models, they are simply designs from the modeller's imagination.

The concept is "Bright, fun, and intense Gunpla." Seira Masuo's models often feature creative use of parts from other Gundam model kits in new ways. Many builds are similar to MSV concepts (such as the Gundam Virtue armored Gundam Exia, or Full Vernian GM Custom), while others involve builds or paint schemes to make Mobile Suits resemble others (such as the ZGMF-X23S Saviour Gundam modified and painted to resemble the MSZ-006 Zeta Gundam, and a matching LN-ZGMF-X13A Nix Providence Gundam to resemble PMX-003 The O.

Seira Masuo also features as a character in Model Suit Gunpla Builders Beginning J with the GPB-X78H-S1 Avalanche Gundam, which is the same style of build as his Gunpla Love works. In addition, his works in the Gundam Breaker video game series have also been published and featured in magazines. 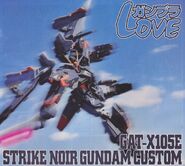 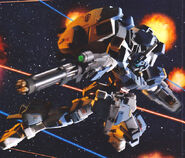