Gunpla Battle (ガンプラバトル, Ganpura Batoru) is a form of simulated battle involving the use of Gunpla. This concept first appeared in Plamo-Kyoshiro, but the term 'Gunpla Battle' was not introduced till the the Model Suit Gunpla Builders Beginning G and its assorted side stories (D, and J). It subsequently appeared in the Gundam Build Fighters and Gundam Build Divers anime series as well as related side stories.

In this series, simulated battle using model kits, which is not limited to just Gunpla, is known as Plamo Simulation. (The word Plamo comes from PLAstic MOdel ) The players put their model kits into the dome, and put on a special helmet after sitting down. They then participate in virtual battle. The damage in the battle is replicated on the real kits, and modifications done on the kits have an effect in the battle.

There is also the Biochip Plamo Controller (BCPC), which is housed in a huge facility called the ‘Plamo Simulation Center’. It seems to be an extension of the standard simulation but with an additional biochip which has the player’s biodata. To win the battle, the biochip hidden in the kit must be destroyed. In this system, psychic power is used to channel the player’s spiritual energy to control the model kits.

Gunpla battles are operated like flight simulators. In the OVA, players (also known as Gunpla Meisters) go to the local P.O.D. arcade, which has a Haro for them to place the Gunpla in. A giant Haro is available for larger Gunpla such as the RX-78GP03D Gundam "Dendrobium Orchis". For safety reasons, the player is required to wear a pilot suit. Game controls, as well machine specifications are based on how the Gunpla is created/customized. The Gunpla tournament involves battles between three-player teams. .The performance of machine is relative to the Gunpla itself, every bit of detail increase its performance, while shoddy work makes it lower. Scale also plays a major factor in Gunpla battle; for instance, a player can pilot an MA-08 Big Zam mobile armor, but if the Gunpla is 1/550 scale, then it is actually smaller in the battlefield than a 1/144 scale mobile suit.

Gunpla battles are played on one or several large hexagonal table-like 3D image projector that are linked together. For example, the battle system in Iori Hobby Shop has only a single hex, Josef Kankaansyrjä's gunpla battle room has 4 hexes, and Seiho Academy use 7 hexes. The machines are set up in various locations around the world, and to operate them, a person is required to set a GP Base that registers the Gunpla and its builder as well as its pilot. This allows a co-op battle with the Builder of the Gunpla acting as the operator/navigator and the pilot as the Fighter. It is also possible for a person to act as both, in fact, this is often the case. The machine also projects a holographic interface around the participating combatants, with the Fighters given a pair of glowing orbs that act as the controls. Weapon and system slots are displayed, showing the Gunpla's current weaponry and which special system is available for use.

In Gundam Build Fighters Amazing, the battle system that appears in Toru Satsuki's vacation house is an older model that does not use the GP Base; it instead uses a large control panel to set various configurations.

The Gunpla are brought to life via Plavsky Particles. These particles are also able to fully replicate effects such as beam weaponry, thrusters, etc as well as the arena itself and its physics to increase the realism and immersion. A Gunpla's performance directly correlates to the quality of its construction as well as the materials that were used (For example, reinforcing a beam rifle's barrel with metal parts will increase its durability allowing it to fire a stronger beam without adverse effect). Through certain means of particle manipulation, special systems such as I-Fields can also be replicated, even on units that never had them in the original show as with the I-field used on the Apsalus III or new features such as the 侍ノ弐 Sengoku Astray Gundam's particle Fa Jin style.

Previously, the damage inflicted in combat was passed down to the actual Gunpla. Thus, if a unit was beheaded in battle, it would remain beheaded once combat ended. However, the rules had changed by the time the Yajima Stadium was unveiled four years after the 7th Tournament, leaving three levels of combat ratings, C through A. C was the lowest, where even if a suit was destroyed, when combat ended, the model was not damaged. B was the middle level and used for the regional tournaments; this allowed low-level damage to be incurred on your model, but not outright ruin it. A was the highest and it could lead to models being obliterated. As revealed in Our Gunpla, the Meijin Cup building competition utilizes Gunpla Battle to settle contesting of a winner, with the damage level set to C as to not damage the models.

Prior to the 13th Gunpla Tournament, ties were settled through a method called the "V-Attack Method", in which victory was given to the first Gunpla to inflict damage on the other. This however can prove frustrating should the opponents be very skilled, as the usage in the battle between Greco Logan and Ricardo Fellini dragged on for more than two hours before it ended. The deciding factor was later changed for the three man team format, whereby in the event of a tie, a single representative will be chosen to fight for their own team. Any damage to the Gunpla can only be repaired via what they have with them, thus it is highly possible to have a fight being done with quick kitbashed suits.

While technically each player can only bring in one Gunpla, the rule can be bent by using Bits or support units, as long as the Builder manages to construct these support units individually, make sense in the context, and/or start out attached to the unit. Examples that utilize such "loophole" including: Gundam Double X and their Bit mobile suits (story context); Gadelaza with its 154 bits (required to be built painstakingly); GM Sniper K9 with its K9 support unit.

As with Gunpla Builders, the performance of a Gunpla in battle is relative to how a Gunpla is constructed. A straight assembly Gunpla (or what is known as an out-of-the-box Gunpla) tends to be weak like a normal mass produced Mobile Suit. It's stated that even a Gunpla that's just been painted tend to do even better than a straight assembled one. However, it is known that a Fighter's piloting skill can compensate for the lower performance of a straight assembled Gunpla and even make it on par with a painted one. A Gunpla's stats are determined by six factors: Adhesion Intensity, Joint Motion, Paint Work, Special Processing, Reflected World, and Total Intensity. The higher the stats, the better off the suit is.

In Gundam Build Fighters: Battlogue, it was revealed that the battle system's OS was upgraded sometime between the 7th and 13th Gunpla Tournament, and its autopilot mode is equipped with artificial intelligence (AI). This allows those who have no control skills to still enjoy Gunpla Battle. Different kinds of AIs are available, including quasi-personality AIs based off of famous pilots of the Gundam metaverse that will act and fight like their namesake. For instance, the Char Aznable AI is shocked when the Ribbons Almark AI sounds familiar and when the Ribbons AI is replaced with that of Amuro Ray, Char demands to know why Ribbons sounded like him. As well, the AIs have no problem controlling units not from their universe as seen with the Amuro Ray AI controlling the customized CB-9696G/C/T Reversible Gundam, which is based on a unit from the Anno Domini universe.

By Gundam Build Fighters Try, the battle system is capable of generating 3D computer graphic (usually the Hi-Mock) to be used as training opponent.

Gunpla Battle was once conducted using a system similar to the Gundam Build Fighters series' and known as the Gunpla Duel (albeit with circular table, joysticks instead of holographic control spheres, and a screen instead of a cylindrical hologram interface). The Gunpla Duel, also known as GP Duel or GPD, was eventually phased out after the boom in popularity of the online game, Gunpla Battle Nexus Online. In GPD, real Gunpla model fight each other, attacks cause real damage and the Gunpla can be irreparably crippled if shot down. The GPD has the same control system as GBN, but the Gunpla is set on a launch pad to start the battle. A coating sequence then begins and the Gunpla start moving once the sequence is completed. The GPD's battlefield may have weapons that the Gunpla can use against each other.

Changes by the 13th championships

By the time the 13th championships come, there are a few rule changes, at least for the under-19 championship.

Simulates different parts of space such as the Moon's surface or a Universal Century battlefield. The City field can also be combined with this field if a colony is part of the setting.

Simulates a desert setting in a hot dry weather.

Simulates a forest or jungle setting in different seasons on Earth or inside a colony. In a colony stage, damage to the colony structure will result in an adverse change in atmosphere, with strong winds drawing all objects into the hole. A Gunpla loses by field-out if it is sucked out of the colony.

Simulates either an Earth city or the inside of a colony. As with the forest stage, colony city stages are susceptible to structural damage.

Simulates a sky setting filled with floating masses of land.

Simulates a canyon or gorge landscape in daytime or nighttime settings.

Simulates a small Island with combination of Forest, Canyon, and other possible field types.

Combines all fields into one to accommodate multiple Gunpla. Players starting in the space field can make an atmospheric entry to Earth to continue their battles in the other fields.

A single race track built around the Forest field.

A custom field developed by the Gunpla Mafia, it is a tower on an island built from a downed space colony. Players entering the tower are teleported into different fields to battle members of the Gunpla Mafia. 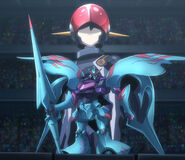