Gunpla (ガンプラ Ganpura), a portmanteau of "Gundam plastic model", is the common name for plastic model kits depicting the vehicles and characters of the fictional Gundam universe by Bandai. These kits have become popular among mecha anime fans and model enthusiasts in Japan and in other nearby Asian countries since the 1980s. Gundam modeling spread in the 1990s with North America and Europe being exposed to Gundam through television, video and manga.

Gunpla are manufactured by Bandai in Japan, or China, which has an exclusive license in manufacturing and marketing the kits around the world. The first Gunpla kits were sold in 1980 in Japan.

Gunpla kits consist of several trays of parts or "runners" that either snap-fit (most post-1990 models) or require glue (older models prior to 1990) to put together. The cover image on the box, or box art, is usually done by an illustrator with a picture illustration of the subject mecha design in action. All Gunpla are supplied with stickers and sometimes decals to apply extra colors and markings as seen in the show, movies, manga or video games. Smaller or lower grade kits often require paint to give the model a finished appearance.

Since the first Gunpla release, there has been a constant improvement in quality design, material and manufacturing technique by Bandai. The basic kits of the late 1980s (routinely re-released by Bandai, with some exceptions) require cement and paint. These kits when completed, have very limited range of motion which renders them almost not poseable. These models were retrospectively called FG (First Grade).

Later on, after FG, the quality of the moulding of plastic was improved and HG (High Grade) level kits were introduced in 1990. These kits at either 1:144 or 1:100 scale, provide for better range of motion and greater posability. It is important to note that the SEED and SEED DESTINY 1:100 scale models do not have HG listed anywhere on the box or manual, but they are considered HG in terms of quality.

The highly anticipated HG Universal Century series, commonly called the HGUC series, was released in May 1999. Created in an easy to collect 1:144 scale, it represented a chance to release versions of many Mobile Suits for the first time in kit form using refined designs and modern injection moulding technology. The high quality of the HGUC series makes it the rightful heir of the HG series released in the 1990s. New designs, with new mechanical improvements, continue to be introduced in the series even today. Furthermore, all modern 1/144 HG models, such as the Gundam SEED line, are built to the same quality of early HGUC models. Starting in 2010 the HGUC line incorporated mobile suits from the alternate timelines that had not received an HG release. In 2013 Bandai launched the "All Gundam Project" in conjunction with the release of Gundam Build Fighters to release all lead Gundams with the universal joint technology in the High Grade line.

In July 2010, Bandai introduced the 1:144 Real Grade (RG) line as part of the "Gundam 30th Anniversary", which takes design elements from the Master Grade and Perfect Grade line such as an inner skeletal frame. This Gunpla line achieves the largest range of motion in each joint.

The next level is designated as Master Grade (MG), which was introduced in 1995, and are only offered in 1:100 scale. These kits are manufactured using higher quality plastic and the resulting molds are of a greater standard. However, the model is more expensive, complicated and takes longer to construct. The finished models offer a superior range of motion compared to the lower level kits to provide for an even wider range of poses, thanks to an inner frame. Some of them actually include specially designed stands for added display ability. Master Grade kits are very presentable assembled straight from the box, but adding paint and detailing can greatly improve the appearance of the finished model.

In September 2014, Bandai introduced the Reborn-One Hundred (RE/100) line. This 1:100 scale line consists of models that are too large, too obscure, or too costly to produce into the MG line. As such, the kits lack the inner frame and detail level of MG, but offer articulation levels equal to or better than 1:144 scale HG kits.

The highest quality kits are known as Perfect Grade (PG), introduced in 1998. These 1:60 scale models are made of even higher quality plastic and metal components. These kits include parts that have to be secured with screws, and often require some minor wiring for small LEDs. The market for the Perfect Grade level of models is limited due to the higher cost, often costing between $100 to $300. Perfect Grade models are a true challenge and their construction can take days, or even weeks.

Over the years, Bandai released special limited editions of various kits, usually as competition (such as the yearly Bandai Action Kits Asia (now Universal) Cup held in Hong Kong) prizes, or as an event-limited (such as Japanese toy expos, movie launch premieres) item, although sometimes these kits are sold as limited web-shop items or discreetly sold by Bandai. These kits usually come in clear plastic, metal-plated (certain kits are in so-called 24K gold finish), "gloss-finish", "pearl-finish", "titanium-finish", or any combination of these. Their prices are usually higher than their regular-release counterparts.

Bandai has also released some Gundam garage kit under their branch, B-club. These models are composed of unpainted resin with no decals provided, often needing modification by the modeler due to the inherent properties of the manufacturing process. While comparably more expensive (some surpassing $400) compared to plastic kits, they offer an unparalleled level of detail for the dedicated and experienced model builder.

A few select kits have also appeared manufactured from metal. These kits are offered by several different manufacturers and most commonly will result in a finished model of about MG level.

Also offered is an expanding line of small plastic kits labelled SD Gundam (Super-Deformed Gundam) which are not presented in a particular scale. "SD" Gundams are comedic renditions of the various Gundam mecha designs featuring a disproportionately large "head." These kits are often much easier to construct but offer very limited possibility and require paint and detailing to truly "finish" the kit. The most famous line is the BB Senshi (known as SD GUNDAM BB Warriors in Bandai's English page). Depending on popularity of series, SD units may also be sold in separate product line (e.g.: Superior Defender Gundam Force).

Bandai also offers Real Detail model kits, which is exclusive to the Cosmic Era universe. While the scale is 1:60, they are basically scaled up HG kits with some added details. The level of details and possibility are not comparable to Master Grade and Perfect Grade kits, but some models feature gimmicks like light up LEDs and includes a stand.

Bandai often produce limited run kits for special events (JAFCON, C3 or locale specific events.) These kits are generally packaged differently from normal production kits, but usually differ only in that they are fabricated with metal plating or in translucent plastic.

This line depicts vehicles in supporting roles, such as tanks and fighters. They are less expensive than garage kits, yet have higher detail than regular plastic models. Although they are usually in 1:44 scale, vessels such as the Argama and White Base are in 1:1700. Other series featured in this line include Patlabor, Sentō Yōsei Yukikaze, and Ace Combat.

Released in 2006, it uses the 1:35 scale for armored fighting vehicles. Kits can be bundled with soldiers, firearms, vehicles and MS parts.

Launched in 2007, this series consists of pre-painted kits molded in the 1:200 scale.

The Gundam Fix Figuration (G.F.F.) series of collectible figures was started based on the Gundam mechanical designs of Hajime Katoki and his 'Gundam Fix' illustration artbook and are released by Bandai.

A large-sized Gunpla line in the 1:48 scale, it was introduced on March 6, 2010 as part of the Gundam 30th Anniversary. The Mega Size Model RX-78-2 Gundam is based on the Green Tokyo Gundam Project (Gundam Front) 1/1 full-size model.

Entry Grade, or EG, is a line of 1/144 scale model kits, or Gunpla, of the Mobile Suits from the Gundam meta series. Introduced in 2011 and made in China, the line was marketed to emerging markets in Asia. EG kits are similar to First Grade or No Grade 1/144 series Gunpla kits, wherein they contain no polycaps and are molded in only three colors.

The original First Grade line, or FG, was part of the Gundam 20th Anniversary Big Bang Project in 1999 as a modern remake of the original 1980 1/144 kits. As such, the kits were molded in one color and contained no polycaps, but featured the snap-fit assembly of current kits. The three Gunpla in this line used designs based on their Perfect Grade counterparts.

The very first kits have been running for 30 years (starting with RX-78-2 Gundam) and are routinely re-released by Bandai. As these kits are limited in articulation and require glue (for the early kits) and paint to assemble, these have retroactively been categorized as No Grade (NG), to differentiate them from First Grade (FG).

Released in 2011 with the Mobile Suit Gundam AGE series, it comes with a Gage-ing Chip for the Gage-ing Battle Base arcade game.

A special limited release sold at events such as the "Gundam Expo." With the exception of clear parts, the kits are made from recyclable materials; specifically, melted-down plastic left over from the manufacture of other models.

For trade shows and toy fairs, Bandai displays some extremely large models in 1:6 or 1:12 scale. True to the scaling, some of these models are well over 5 feet (1.50 m) tall. Although most of these are one off promotional models used for display purposes, Bandai has produced a few of these for commercial purposes under their HY2M line. Notably, these are MS-06S "Zaku II Commander Type" (Char Aznable custom), which is now out of production, and the "RX-78-2 Gundam". These generally retail for approximately $2,000 and are intended to be sold primarily to store owners as display fronts.

In 2020, Bandai Spirits announced a series of model kits based on the design of the 1:1 scale walking RX-78-2 Gundam, located in the Port of Yokohama, Japan. These models are not assigned any grade, are in varying scales and have the detail level of High Grade model kits.

The following are all the equivalent sets of a MS-06 Zaku II each demonstrating a different series of Gunpla Model Kits. 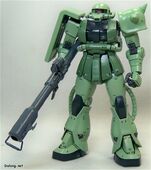 Upon buying a Gunpla model kit, the buyer will receive several "runners" that either snap-fit (most post-1990 models) or require glue (older models prior to 1990) to put together. The runners include all of the kit's parts inside of a tree-like mold. There is also manual used for building the kit, and possibly decals, which are sometimes not provided in lower-grade kits. Popular tools used to cut the molds out of the runners include side-cutters and a hobby knife.

The runners provide  a code used to differentiate each part from another. By following the manual, cut out the according parts needed from the runner and proceed to snap the parts together. These steps will become a repetitive process as there are several parts needed to be cut and snapped together. Another step that many builders also do is to remove "nub-marks", which are leftover piece of plastic from the runners. Tools used to remove the excess plastic are sandpaper and a hobby knife. Overdoing this process could result in damaging the whole part. The provided decals and stickers are used to display extra details, colors and markings as seen in the show, movies, manga or video games. Smaller or lower grade kits often require paint to give the model a finished appearance.

A list of tools commonly used to build Gunpla kits: 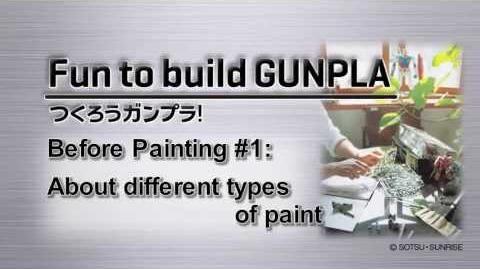 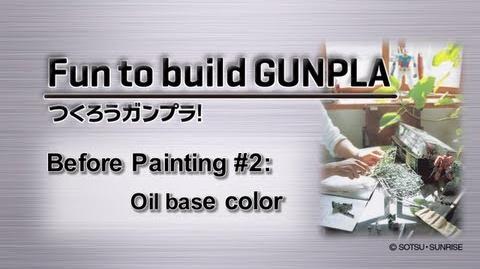 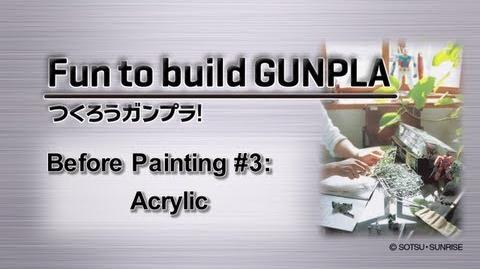 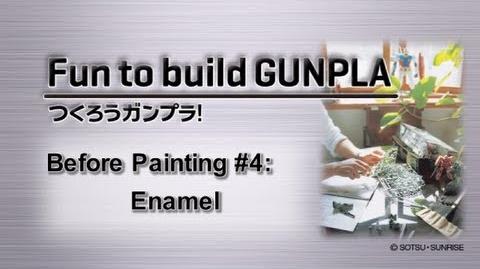 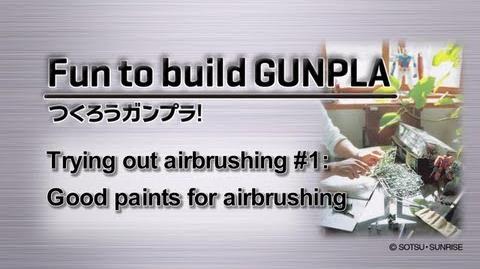 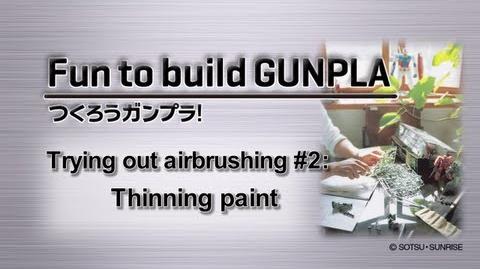 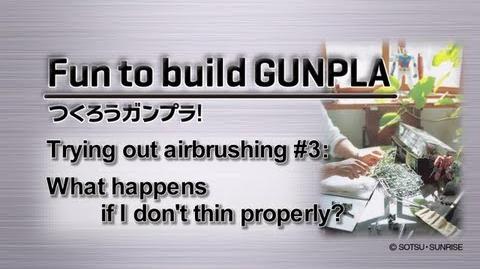 Trying out airbrushing 3 What happens if I don't thin properly?
Airbrushing 3 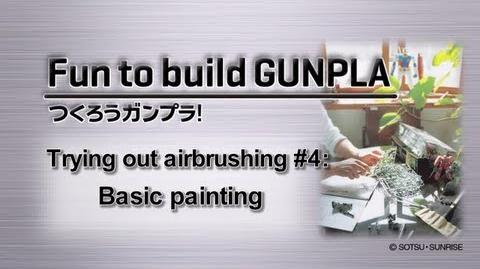 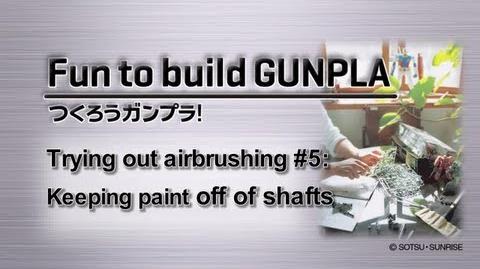 Retrieved from "https://gundam.fandom.com/wiki/Gunpla?oldid=475532"
Community content is available under CC-BY-SA unless otherwise noted.