The Gundam Try Zeta is a version of the MSZ-010 ΖΖ Gundam modeled after the "Brave" metaseries as well as Daitarn 3.

A pair of large physical blades modified from Double Zeta's hyper beam sabers. These blades can be combined to form a Super Sword (choken) with the blades separating into a cross guard and generating a gigantic beam saber.

In alternate event of Mobile Suit Gundam ZZ's episode 25 The Face of Rommel, the MSZ-010 ΖΖ Gundam was heavily damaged after the battle against Desert Rommel's MS-09H Dwadge Reformation. However, the Gundam Team manages to repair it using parts from MSZ-006 Zeta Gundam with help from an old man who called himself Dr. Gundam. 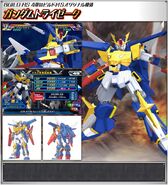 Retrieved from "https://gundam.fandom.com/wiki/Gundam_Try_Zeta?oldid=412706"
Community content is available under CC-BY-SA unless otherwise noted.