26
Gundam Reconguista in G (ガンダム Gのレコンギスタ, Gandamu Jī no Rekongisuta?) is a 2014 anime television series created by Yoshiyuki Tomino. It is his first major Gundam project since the 2005-2006 Mobile Suit Zeta Gundam: A New Translation film trilogy and debuted in Fall 2014. It is set in the Regild Century, an era set after the Universal Century, and follows the adventures of a pilot trainee named Bellri Zenam in the Capital Guard, an organization protecting a space elevator.

The Universal Century, a history marked by space colonization and space warfare, has passed. Humanity's prosperity has ushered in a new era of global peace known as the Regild Century. Bellri Zenam, a pilot training with the Capital Guard, is chosen by the G-Self-a highly maneuverable Mobile Suit of unknown origin, operable only by a select few—to embark on a journey that will change the course of the Regild Century forever.[1]

Yoshiyuki Tomino returns as both director and writer. The character designs are done by former Studio Ghibli animator Kenichi Yoshida, who had previously worked with Tomino on ∀ Gundam and Overman King Gainer. The mechanical designers are Akira Yasuda, Ippei Gyōbu, and Kimitoshi Yamane. The music score is by Yugo Kanno.

Madman Entertainmen simulcasts the series in Australia and New Zealand via AnimeLab[3], whereas Viewster simulcasts the series in English and German subtitles in Europe.[1] The official and legal North American stream was made available on GundamInfo's YouTube channel, with the first episode uploaded on February 26, 2015.[4], and each episode added every Thursday at 23:00 Eastern Standard Time (Friday 03:00 GMT).

On the 25th of July, 2015, Anime Limited announced at their panel at MCM Manchester Comic Con that the first part of the UK and Ireland release of Gundam Reconguista in G will be in December, where it will have Japanese audio and English subtitles.[5] 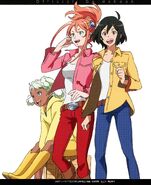 Beginning of Gundam Reconguista in G