December 1, 2006–ongoing
Gundam MS Graphica is a photo-novel that contains three stories set in the Universal Century timeline. It was published in December 2006 by Softbank Creative.

A story that details the development of the RX-178 Gundam Mk-II.

Set in U.C. 0095, it deals with the case of an Anaheim Electronics employee and research regarding the MSN-001 Delta Gundam. 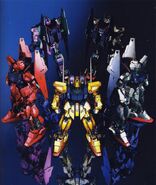