The Gundam has a sensor slit on the top of the head with a moving sensor eye, which can traverse to the back of the head. Its Core Block System allows the Core Fighter to dock with the Gundam by entering through the back, and the Core Fighter is stored inside the torso.

The Gundam G40 can release cooling fluid from its crotch, allowing it to reenter the atmosphere safely.

The Gundam was apparently created by Kamaria Ray, Amuro's mother. Its history appears to be largely the same as the original Gundam (fighting several Zaku IIs inside a colony, fighting Char's Zaku, reentering the atmosphere, fighting the Elmeth and the Zeong, etc.), though the circumstances under which Amuro boarded it was completely different - it landed in front of Amuro on its own before opening its cockpit, with the voice of Kamaria calling out to him. It was eventually destroyed in the same manner as the original. 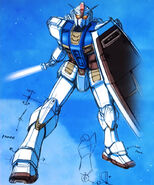 Ripping off a Zaku's power pipe