In the Nielsen Labs, scientists are preparing test runs on the Plavsky Particle Mk. II, using the brand new Scramble Gundam as a test unit. The crystal to make this possible was refined by Nils Yajima. However, during testing, something causes the crystal to react badly, causing the Scramble Gundam to react violently. The Gunpla races out of the ring and towards the control room, but is stopped by the emergency system.

In the 14th Gunpla Battle Japanese Under-19 Championship, Team Try Fighters is battling Team Song Dynasty Vase in the finals. Yuuma and Fumina put Gyanko's team under pressure, but Gyanko is able to push back, holding back a tag team attack and allowing Mahiro and Keiko to use the Northern Pod support mecha to attack the two with a firebird-like ramming attack. However, Sekai arrives and deflects the attack. The battle continues with Gyanko's team striking them, only to watch as the Try Fighters escape unscathed and unleashing their new finisher attack on them, earning their ticket to the Nationals once again.

After the battle, Fumina calls Yuuma to let him know they've been given an invitation to test out the brand new Gunpla Battle system at the Nielsen Labs. However, Yuuma lies and excuse himself. Fumina reluctantly agrees but her mother arrives with the phone with Sekai on the line, agreeing to go with Fumina after hearing over the invitation. On the plane, Sekai takes notice of Fumina's face going red as she thought of her mum's teasing words and questions if she's sick, which she denies in a panic.

At the Nielsen Labs, Nils learns that another testing has caused the same problem. Scared of the testers' safety, he decides to postpone their testing for now, which Sekai and Fumina learn as they arrive on the island. They're apologized to and offered usage of the island lodging until it's ready. Sekai's bummed out over this, but the disappointment fades as they see the lodging, leading the two to fawn over it. However, as Fumina messes with a hammock, it flips her over. Sekai tries to save her, but goes over with her, ending up with him on top of her and Fumina blushing harder as her mother's words come back to her mind. However, the moment is shattered as Gyanko, Shia and Minato step out to tease them. When asked why they were there, Shia was invited as was Minato due to their positions in last year's National Tournament. Gyanko was chosen to be Shia's partner as her brother was in the European open tournament and she went in his place. The tension turns into a Newtype confrontation between the three girls, Shia and Gyanko declaring that they won't let Fumina be with Sekai alone. However, Sekai ends up walking off in the middle of it all. Minato brushes off and tells them they should all just Gunpla Battle before showing off his newest entry to the Meijin Cup - a "Titans Maid" version of the Super Fumina, which Fumina pummels him over for.

At the labs, Nils arrives and tells a fellow scientist that he feels that what's causing this is an external factor. Before he can say if it might be a hacking, the effect happens again. Out on the beach, Sekai is busy training when his Kamiki Burning Gundam gets up from its resting spot on a tree and hovers away. Sekai gives chase and is able to catch it, getting the attention of a mysterious purple-haired child, who is in awe over the Gunpla. Some distance away, Yuuma is busy working on a AMX-109 Kapool for the next shoot when Mirai takes notice of something nearby - Sekai. To Yuuma's horror, he recognizes him immediately and wonders why he's with another girl and the horror grows worse when he hears Fumina's voice. While Fumina grips as to why Shia and Gyanko are in their swimsuits, her own complaints take a backseat when the trio finds him with the girl. Promptly, the girls flip and Yuuma attempts to escape, only to run into a not-so-happy-to-see-him Minato.

Back at the lodge, the girls and Minato lay into Yuuma for his lies, which he sadly mentions he has no excuse for while Shia and Gyanko accuse Sekai of being a lolicon, which Sekai has no idea what's going on. At the labs, Nils watches as another test starts up. When things starts going red, he recognizes what's going on as what happened eight years ago. The Plavsky Crystal goes berserk and starts growing extra crystals as the young girl from earlier declares that she's found something. The reaction kills the power and Gyanko attempts to take advantage of it, only to be stopped by Fumina. When Yuuma spots something in the distance, he freaks out and Minato teases him. However, they all freak out when they see the objects coming at them. Sekai uses his martial arts to strike them down, left in confusion as they were all Mocks. Fumina's given a quick call to evacuate the island as the artificial crystal that was supposed to be tested has gone out of control. However, they all race off to investigate, finding the Labs covered in crystals. Minato and Yuuma recognize the phenomenon that happened 8 years ago and decide to get in. They're able to break in and set a Battle System to Emergency Mode. When Mirai's friend Satomi questions if she was going to go into battle, a starry-eyed Mirai gives her a Puuchiguy for her to control.

Launching from the platform, the Gunplas dive into the building, finding crystals spreading across the building and battleground portals springing up all over the place. The eight found themselves under attack by a literal army of Gunpla, which they make short work of. They are, then, confronted by the MRX-009 Psycho Gundam and MRX-010 Psycho Gundam Mk-II. The eight work together to strike down the massive Gunpla and make it to the center, where the Scramble Gundam is waiting. Nils attempts to get the gang to retreat as the Scramble Gundam is much stronger than their suits due to it being connected to the experimental system. The Gunpla easily shows its strength by evading and blocking all of their attacks. The Scramble counterattacks by opening three portals, housing Diva, Celestial Being and the Colony Laser. The three fire their powerful weapons as the eight pool their resources to block the attack. The blocking is successful, but their suits are heavily damaged. Sekai decides that Try Fighters should use the New Winning Road and the others opt to buy them time. However, to Minato's horror, the Scramble Gundam changes their background to a city... and triggers a Colony Drop! The team performs the maneuver, repairing the Kamiki Burning Gundam and giving it a powerful energy boost that allows them to catch the falling Colony and destroy it. Urging the others to join in, the New Winning Road takes on new levels of energy, summoning a massive Gold God Superior Kaiser. With one punch, the Superior Kaiser defeating the Scramble Gundam and destroying the Plavsky Crystal, ending the crisis.

As everyone celebrates their victory, Fumina asks Yuuma why the suit went on a rampage. He isn't sure, but he and Sekai spot a glowing orb and everyone follows it, where they find the mysterious girl in possession of the Scramble Gundam. Sekai figures out that she wanted her own Gunpla, but isn't sure if she actually caused the reaction. Fumina tells her that she can't have that Gunpla - that she has to build her own to have one of her own. When she admits she doesn't know how, Fumina and Sekai agree to help. As this transpires, Mirai asks Nils not to tell anyone of this. He had no plan on doing so as no one was hurt, but he hopes the others can help spread the joy of Gunpla as his friends did with him so long ago. Happily, the girls help the younger one build her own Petit'gguy and control it. Sekai's amazed at her appetite and Fumina is horrified that she's curious over the Super Fumina. Sadly, it's time for her to go. She thanks everyone for what they've done and bids them farewell by teleporting... which freaks everyone out, thinking her as a ghost.

In a familiar place, the young girl reunites with her mother, who declares that she was off building Gunpla and it was so much fun. Her mother, revealing to be Aila Jyrkiäinen, agrees and tells her that thanks to Gunpla, she was able to meet her dad.

The end card shows the Petit'gguy sitting with a SDV-04 Command Gundam and a GPB-X80 Beginning Gundam. 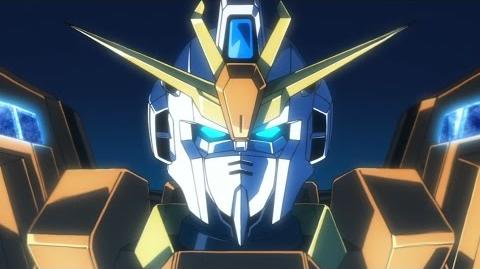