However, the Seiho Academy that Sei Iori once attended has failed to catch onto the trend. The only member of the school's Gunpla Battle Club is its president, middle schooler Fumina Hoshino. Currently, there is no way the club can participate in the middle and high-school division of the upcoming All-Japan Gunpla Battle Championship, where players fight in teams of three.

Then Fumina meets a new transfer student. He is Sekai Kamiki, a young martial artist who has been traveling with his master. Together with a young Gunpla builder named Yuuma Kousaka, they finally have three members for their team.

Within the second box of the Blu-Ray release of Gundam Build Fighters released on 20 June 2014 is a 2 minute short titled Six Years Later, depicting a grown up China who has moved to France to study art, this was the first hint of a sequel series.

Gundam Build Fighters Try airs every Wednesday at 18:00 Japanese Standard Time on TV Tokyo. The anime is simulcasted on the GundamInfo YouTube Channel with English, Korean and Traditional Chinese subtitles.

The English dub of the series premiered on January 2, 2016, on Cartoon Network in the Philippines, airing every Saturday and Sunday at 17:45 Philippine Standard Time (09:45 Greenwich Mean Time). Gundam.Info began streaming the English dub on August 22, 2017, releasing five episodes weekly.[2]

On June 1, 2016, Nozomi Entertainment announced that they would release the Blu-ray of Gundam Build Fighters Try along with that of Mobile Suit Gundam: Char's Counterattack in September 2016.[3][4] 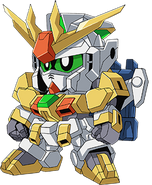 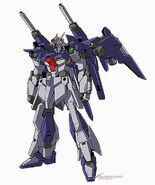 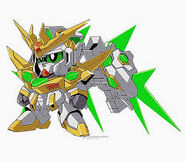 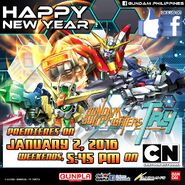 Advertisement for the English dub of the series. This was displayed in Happy New Year on Facebook around the Philippines.

Retrieved from "https://gundam.fandom.com/wiki/Gundam_Build_Fighters_Try?oldid=428034"
Community content is available under CC-BY-SA unless otherwise noted.