The day before the ceremony marking the completion of the Yajima Stadium, Nils Nielsen invites Sei Iori, Meijin Kawaguchi, and others to an exhibition battle using the new large-scale battle system he has designed. Now that they are all reunited, Sei attempts to show off the Build Strike Cosmos that he has upgraded for the exhibition, but then he notices something missing... Meanwhile, somebody takes control of the stadium's systems, sealing Sei and the others inside. Before them appears a mysterious group, which has come to challenge them to Gunpla Battle.

In London, England, unauthorized Plavsky Particles have been detected. Using a simplified Gunpla Battle system, the Perfect Gundam sneaks into a building to open a door, allowing Takeshi Iori and other members of the International Gunpla Battle Referees to bust in, but it's empty - the people they were looking for weren't there. Takeshi calls Master Chinan and learns it happened to him and Mr. Ral. It was a diversion...

At the Memorial Park where the former World Tournament Venue was at, Ricardo Felini and Meijin Kawaguchi meet up. Ricardo mentions he couldn't not stop at this place, not with everything that happened in the 7th World Gunpla Tournament. Nils Nielsen joins them, reassuring them that their legacy will be carried on. At that, Nils invites them to the brand new Yajima Stadium, where Gunpla Battle Tournaments will be held afterwards. Invited inside, the Meijin compliments Nils on the new large scale battle system when Mao Yasaka, China Kousaka and Sei Iori make their presence known. Mao compliments Ricardo on his looks, but he teases the kids on their lack of growing, which Mao laments as he's still smaller than Misaki. China thanks the Meijin for coming along, calling him "President Yuuki", which Sei tries to discourage, but he lets it slide.

Mao gets down to business, revealing that he has a brand-new machine for the upcoming battle, which makes Ricardo boast of his new Fenice and mentions the Meijin has one as well. He doesn't deny it and suggest that this, the first real fight since the events of the 7th, should be enjoyed in earnest. Nils claims that while he's retired from fighting, he'll participate as well to see how everyone enjoys the new system, though Mao thinks he just wants to fight with them, which seems to take him off-guard. When the Meijin asks about what Sei will pilot, Sei goes to reveal the Build Strike Cosmos, complete with a revamped RG Parts system, only to find out its missing. As he wonders where it disappeared to, China remembers him fawning over a diorama of Char Anzable's Z'Gok defeating a GM when someone bumped into him, thinking someone stole it from him.

At that, the lights go out, exits are shuttered and no phone signal can be picked up inside the building. When Sei asks who could have done such a thing, a voice calls out boasting that they did. On a platform stands five figures - the Gunpla Mafia. While Sei and Mao have no clue who they are, Ricardo tells them their background. The leader, then, declares his intentions - to those watching in real time, the Mafia will crush the Battlers of the Seventh Tournament to destroy morale, prevent the relaunch of the Tournament and control all Gunpla Battle, a declaration which can be seen by Kirara, Misaki and Takeshi. When challenged, the Battlers refuse to back down, which surprises China. To this point, Sei reveals a new Gunpla he's been building, though not complete - the Star Burning Gundam. With things moving along, the battle starts, a mysterious new Battle Stage revealing itself made by the leader himself.

Setting their Gunpla, the five Battlers launch into the new field. Without any idea what they're up against, they can't plan nor can they expect them to play fair. Ricardo's fine with that and blasts open the door to the tower, the five going inside and finding themselves sent to the Moon. Thinking there's no one around, they boost ahead, only for Nils to stay behind - there's someone here and the Ninpulse Gundam reveals a GM waiting. The pilot admits he's impressed that Nils spotted the Gunpla under Optical Camouflage, but boasts a retired fighter like him is no match for him. Nils easily cuts down the GM, only to learn there are many, many more GM-types waiting in the wings and he's controlling them.

Further on, the remaining fighters find themselves in a mysterious rose garden before spotting a mysterious Bound Doc. Ricardo recognizes who it is and tells the others to go on as the Wing Gundam Fenice Libetera transforms into its motorcycle form to confront the pilot. Ricardo recognizes this person as Gawain, a former member of Team Nemesis. Ricardo accuses him of hitting rock bottom for being fired from Nemesis and joining the Mafia, angering Gawain, who claims he needed the money to make the most beautiful Gunpla. To Ricardo and Kirara's horror, Gawain's Bound Doc's armor in impenetrable thanks to its diamond coating. However, Ricardo finds a weakness with the fact its bottom is completely helpless, cutting the Gunpla's head off with his suit's bike and striking it down with one shot. Kirara cheers loudly in her dressing room over the victory, but its cut off short as a mysterious Gunpla takes down the Fenice as the Fenice is rendered immobile.

On the Moon, Nils continues fighting off the GMs before its struck in the back by one last GM, piloted by the pilot himself. Before he can strike down the Ninpulse, China arrives with the Bearguy III, stabbing it in the head and tossing it away, destroying the suit and saving Nils, the two agreeing to team up. Further along, after the Meijin destroys a set of turrets, Sei discovers a fork in the road, leading to him, the Meijin and Mao to take a separate path. Mao arrives in a city where his opponent is an SD Musha Gundam Mk-III. Mao prepares to strike down the simple suit with his Gundam X Jumaoh, when the pilot reveals her true colors - spamming his view screen with her buxom body, breasts comically bouncing up and down. In another area, the Meijin confronts "J" in a battlefield similar to the lakes underneath Jaburo. He attempts to appeal to the idea of playing fair, opting to take their aquatic Gunpla into the water. However, the Meijin quickly calls him out, revealing the "water" is actually paint thinner that melts plastic. "J" attempts to escape, but is quickly struck down. Mao's fight with the buxom Mafia member is still going sour as he's distracted by her comical actions. However, after fearing the Misaki would shun him for someone like that woman, Mao declares his love for her while blowing away the Musha, causing Misaki to blush furiously at it.

At the top, Sei reaches the final area as Nils and China find Ricardo. Ricardo warns them that Sei's Build Strike is being used by the Mafia the same time he finds out. The leader has set the suit to an auto pilot level way beyond the max, forcing Sei to fight his suit. However, he realizes that the Build Strike has a weakness and exploits it, capturing the suit. The leader calls out Sei for his softness and shuts down the Build Strike before revealing his real Gunpla, the massive Psyco GM. Sei fights the suit, but is easily overpowered, only for the Meijin and Mao to come to his rescue. The leader cheaters, manipulating the Plavsky Particles to prevent them to move when Nils, China and Ricardo come to their rescue. Despite this, the Psyco GM transforms and unleashes a powerful beam attack that stops everyone.

The leader boasts his victory and Sei vows that no one will ever accept them. The leader attempts to finish off Sei when he's suddenly aided by the returning Reiji! Using the Arista on his bracelet, Plavsy Particles fill the the Star Burning as Reiji takes control. Sei tells him to use SP3, the Hyper Star Burning Knuckle, destroying the Psyco GM. With the battle over, the Gunpla Mafia members lament as to what to do before realizing their boss ran off. Angry that he and his brother's ambitions to rule over Gunpla in public and private have been foiled, he attempts to run off to rebuild the Mafia, before Takeshi confronts and arrests him, revealing him as Mikia Mashita, twin brother of the former chairman of the PPSE.

With the case solved, Takeshi thanks the six for their actions as they take the Mafia away. Sei asks Reiji how he came back and reveals that he borrowed Aila's Arista. Ricardo decides to get everyone dinner for a job well done, with Mao and Nils trying to mooch off of him, but Reiji declines briefly, stating there's one thing they need to do: the fated battle between him and Sei. As the others fight on in awe, the two fighters show their amazing skills, taking their fight from the field of flowers into space, lost in their joy.

One year later, as everyone is preparing to graduate from Seiho Academy, China wonders why Sei was in the Gunpla Club Room. He reveals he left behind a memory... 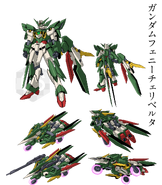