The near future. Years after the huge "Gunpla"-plastic models based on the anime series Mobile Suit Gundam-boom of the 1980s. A second Gunpla boom is taking the world by storm, fueled by the revolutionary new ability to pilot your own Gunpla creations in "Gunpla Battles". These incredibly-popular Battles culminate in a yearly global tournament. Our hero Sei Iori, is a young Gunpla builder who dreams of someday making it to the world championships. An only child whose family owns a model shop, his talent is well-honed, but his weak piloting abilities have led to a series of first-round losses. Then, one day, he meets a boy named Reiji whose piloting skills are incredible. Together as a team, they take on the world!

Their dream is to make it to the Gunpla Battle World Championship... and win![1]

The series aired every Monday at mid-day Japanese Standard Time (03:00 Greenwich Mean Time) on TV Tokyo (the second Gundam anime to air on that channel after Superior Defender Gundam Force) and was simulcasted on the GundamInfo YouTube Channel. It later premiered on Sao TV and BiBi TV in Vietnam on January 25, 2016, airing every Monday to Thursday at 18:30 local time (23:30 Greenwich Mean Time).

The English dub of the series premiered on April 25, 2015 on Cartoon Network in the Philippines, airing every Saturday and Sunday at 18:30 Philippine Standard Time (10:30 Greenwich Mean Time). Nozomi Entertainment presented the Blu-ray cover of their North American release of Gundam Build Fighters on May 4, 2016 on various social networks, mentioning that their release will include both English and Japanese audio with English subtitles. Later, they stated on Twitter that the dub is a Hong Kong dub, it is likely this is the same dub that aired in the Philippines as many English dubs of anime airing in Southeast Asia (such as the dub of Mobile Suit Gundam ZZ) are in fact recorded in Hong Kong.[2][3] The Gundam.Info began streaming this English dub on August 22, 2017, releasing five episodes weekly.[4] A Vietnamese dub aired on various Vietnamese channels in 2016 and also began streaming on Gundam.Info on May 31, 2017.[5] 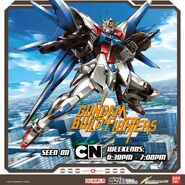 Advertisement for the English dub of the series. This was displayed in shop windows around the Philippines.