Gundam Breaker 2 (ガンダムブレイカー2) is a video game sequel to Gundam Breaker, a Gunpla-based action game. The game was released on December 18, 2014. It was later followed up by a sequel, Gundam Breaker 3.

The general combat is much faster and more fluid than the previous game. Players can hold their melee weapons at the ready than just instantly spawn them when initiating a melee attack. Movement has been greatly improved to allow turning and attacking when boosting. Shields have been revised to have their special abilities and weapon functionality such as the Banshee Norn's Armed Armor DE having its mega cannon I-Field. Instead of taking damage, shields are now unbreakable though this time they only reduce damage rather than nullifying it completely. In addition, AI partners can now revive the player rather than dying on the spot in the previous game. Two more types of collectables have been added alongside the runners, the Materials (represented as white boxes) can be use to create new parts and Luck Boosters (represented as orange red) which greatly increase drop rates, though these can only by bought on the Playstation Store.

The Awakening system has been revised, introducing a new "Burst Action". Unlocked at a certain point in the game, the player can choose from different types of Awakenings which grant special abilities when active as well as replacing the original red aura with a different one based on the chosen Burst Action. Pressing L3 and R3 again will trigger a finishing move that spends the entire gauge. The Burst Action depends on a certain part, making many previous EX-Acts from the first game into these. If a special mode is active while Awakening is in effect, then the aura will be overridden and the theme song corresponding to that mode's source material will play over the current BGM.

Players can also now ride support vehicles such as the Mega Rider and Base Jabber to quickly skim across the battlefield and even man stationed turrets like beam cannons and chainguns. These weapons have excellent breaking power, making them perfect for farming parts. Perfect Grade bosses make a return though this time they can now grab players and take body damage over time. The random star-based system has been replaced in favor of a level up system that lets you upgrade parts by spending money and using materials, rather than having to farm for high quality parts. This in turn also makes the Shop a place to frequent more as players can easily upgrade parts at their base level rather than hunting for quality parts on the battlefield. Any duplicates of parts currently acquired will be discarded and sold, making managing far less cluttered. A new mission type has been introduced to combat against and defend flagships from waves of enemies.

The Gunpla, including the ones that were included in the update from the previous game will be carried over to this game. Builds saved from the first game can also be transferred over, but will be reduced to level 0 to prevent veterans from getting a head start. Additionally, even though these parts are level 0, they can be upgraded. However, higher end parts, such as the Gundam X backpack, require specialized equipment to bring up to level 1. In addition, the game is slated to have over 100 Gunpla kits to choose form, massively increasing the number of options and customization available to a total of over 10,000,000,000 possible combinations. Panel lines have also been added to give the units a more model-like feel as well as additional visual options such as chrome and the ability to change the color of LED-based portions such as optic lens. The decal option has been expanded to allow you to apply any emblem to your mobile suit as opposed to the first game where the decals were limited to the specific part. Another option has been added to place your Gunpla in various poses and take snapshots of them. These snapshots are then uploaded to the Gundam Breaker 2 section of the Gundam Perfect Games website for everyone to see. A contest was also held for those who could make creative Gunpla or established builds with different color schemes. The top winner would then have their unit cameo in Gundam Build Fighters Try. Lastly, the Gunpla from the original game are altered to make them more accurate to their anime and real life-model counterparts such as the Nu Gundam's backpack including the Hyper Bazooka attached as a secondary weapon and the Dom having its heat saber attached to its backpack. However, the Unicorn units can no long be purchased in their separate Unicorn and NT-D modes, now acting as one unit that transforms into the other. 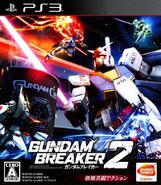