Gundam Breaker (ガンダムブレイカー, Gundam Breaker?) is a video game for the Playstation 3 and PS Vita. It was first released for PS3 on June 27, 2013, and then for Vita on October 31, 2013. Both versions now have an online cross play component to share save data. Unlike most games in the Gundam series, Gundam Breaker focuses exclusively on gunpla rather than a specific story based on Gunpla Love and all Gundam universes. A sequel, titled Gundam Breaker 2, was released on December 18, 2014.

The general gameplay is styled after traditional hack n' slash games. Movement is done with the left analog stick while holding X while moving in any direction initiates the unit's boost. Holding the R1 button while not moving causes the unit to guard if it has a shield. Pressing or holding X while not moving will have the machine jump or ascend and dodging is performed by holding R1 and pressing X while moving in any direction. Square and Triangle buttons utilize close range moves. Holding L1 switches the unit to Long Range Mode to utilize firearms. The O button uses optional equipment such as repair kits or additional weaponry. EX Actions are performed by pressing either Square, O or Triangle while holding R1. EX Actions are special attacks that either enhances the handheld weapon(s) or uses the backpack's featured weapon and gives the unit invincibility frames, making them useful in a pinch, but they need to be recharged before being used again.

Missions are divided into several categories: Normal, Defend, Survival, Team Battle and Area Gain. Normal has the player going through several areas defeating enemies under a time limit until reaching the end point, usually resulting in a boss fight with a PG (Perfect Grade) version of a Gundam. If shot down, the fallen player can respawn immediately, but they will be penalized after the mission is over. Defend has the player(s) defend a single post that will come under heavy fire from enemies spawning from all sides. Survival is similar to Normal, but the mission ends immediately if the player's HP is reduced to 0. Team Battle puts the player in a team up to four against an onslaught of enemies to reduce their battle gauge to 0 by destroying enemies, reminiscent of Star Wars: Battlefront. Area Gain has the same premise but with having to capture posts by standing in their radius.

At a certain point in the game, the player can unlock the GAIOS gauge which when filled up, can be used to activate an Awakening, boosting the performance of the unit greatly while dramatically increasing the size of the melee weapon. Certain parts are visually enhanced by the Awakening gauge such as the GX-9900 Gundam X's panels glowing or an GNR-010 0 Raiser-equipped machine turning green during Trans-Am. Units can take body damage such as the loss of an arm or even bifurcation from an occurrence called breaking. In the case this happens to the player, holding R1 can magnetize the parts back to the whole unit. Loss of parts will negatively effect the suit in a number of ways such as the inability to use firearms, locking on, or boosting. Shields can also be broken if they have absorbed too much damage.

The main aspect of the game is Gunpla and thus your unit will be built from kits that have been produced in real life. While you can simply build a replica of a machine from the shows themselves, you will be encouraged to build a customized unit made from different lines of Gunpla kits (known as kitbashing) also you create a build new Gunpla fan made MS based on Gunpla Love. For the main game, you will be using HG (High Grade kits) but after clearing the final mission, you will gain access to stronger MG (Master Grade) kits. What you equip on the machine can affect its performance greatly as well as its abilities. Parts are divided in several tags such as Head, Body, Arms, Backpack etc. Some parts can offer a number of abilities such as their own EX Actions or Options or can give the machine the ability to hover. For example, the Freedom's HiMAT wings offer the ability to fly as well as its own EX Action to use the wing-mounted plasma cannons. If the mobile suit has enough weapons however, then a second EX-Action will allow them to perform the signature Hi-MAT burst attack. Modules can be added to further enhance the creation's performance, ranging from increased HP and capacity to HP regeneration. The overall performance of the unit depends on the combined quality of the parts used in its construction. In addition, an OS Level (Operating System) is used to prevent the player from using high-end parts early on if they obtain them. Ace Points are acquired defeating enemies in general or in a specific manner. Should you reach a high enough point count, then additional or tougher enemies will appear, yielding much better parts than normal. The unit can be also be renamed and recolored to the player's preference and filters such as shine, rust or scratches can be applied. There is also the option of submitting the creation to the Gundam Perfect Games website for other players and visitors to see. Players can visit the shop to purchase Gunpla kits, items or avatars based on pilot suits used by characters in the shows such as Amuro Ray, Kira Yamato or Judau Ashta or factions such as the Titans or Neo Zeon.

While one can make a machine based on style alone, it may suffer if the quality of those parts are sub-par. Parts can be obtained in missions by destroying enemy units and their quality depends on the color of their icon (white being the lowest and gold being the highest) and the player's Builder Level. The higher the level, the better the part. Clearing the Norma Line in certain missions can unlock entire kits for a certain mobile suit which can be purchased at the shop, though they will not come packaged with their hand-held weapons. Norma Lines for other missions will instead unlock decals that can be applied to certain mobile suits. This also plays a part in the Scratch tag which allows the player to not only construct better versions of parts, but even create parts that cannot be obtained through missions or kits such as the arms of the ORB-01 Akatsuki Gundam or the legs of GN-005 Gundam Virtue. Missions can be played either solo with AI partners or online with other friends. The missions are one in the same for both, allowing veteran players to assist newcomers and ease them through the harder parts of the game. The online mode has the added benefit of allowing players to resurrect each other if one is shot down, which becomes extremely useful in missions where dying once equals mission failure. 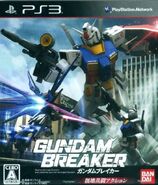 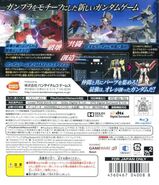 Retrieved from "https://gundam.fandom.com/wiki/Gundam_Breaker?oldid=438526"
Community content is available under CC-BY-SA unless otherwise noted.