Gundam Battle Royale (ガンダムバトルロワイヤル) is an RPG game developed by Artdink for the PlayStation Portable. It consists of the 1st 2 Gundam storylines, Mobile Suit Gundam and Mobile Suit Zeta Gundam.

In this game, the player can create their own character. The player character's name, gender, faction, and genetic type (either a Newtype or an Oldtype) can be altered.

X + [] = transform (only works with Zeta, Messala, Asshimar and Psycho)

Ultimate attack and Infinite Attack Pattern are the 2 most powerful attacks in the game (obviously). Ultimate attack takes 4 SP bars (more on this later), and focuses it on an enemy. The most common ultimate attacks are always used as huge beam sabers, and huge beams from beam rifles. Few Mobile Suits even use an Exam System as their ultimate attack. Infinite Attack Pattern, on the other hand, takes all 8 SP bars (again, more on this later) and focuses on the whole MS itself. The MS starts glowing green and it attacks continuously. Once this is activated, the MS will be unstoppable, and will be impervious from all kinds of attacks. It's like a guard without a shield. 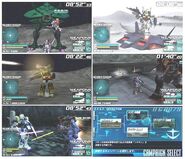 Retrieved from "https://gundam.fandom.com/wiki/Gundam_Battle_Royale?oldid=295986"
Community content is available under CC-BY-SA unless otherwise noted.