Gundam: Battle Assault is a 2D fighting game, developed by Natsume and published by Bandai for the Playstation, which was released on November 6, 2000. It is an American remake of the Japanese game Gundam: The Battle Master 2. It would be followed by a sequel of its own in 2002, titled Gundam Battle Assault 2.

It is the year A.C. 19X. Heero Yuy has once again taken up the Wing Gundam, this time to take out mobile suits and bring peace to the world. As he battles, he's met with different people. Some, like Amuro Ray, want to test him for the battles ahead. Some, like Judau Ashta, just want to make a living using their suit. Many others, however, are unwilling to stand out, lead on by a mysterious person. As he battles and take out different suits, he finally confronts the mastermind of it all: Treize Khushrenada, who seeks to reignite war once more. A violent battle between the Wing Gundam and the Hydra Gundam ends with the Hydra's defeat, though Treize escapes as his base is set to blow. 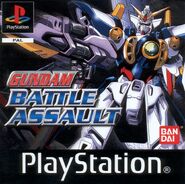 Screencap from the game's Story Mode.