The Gundam Advanced Tertium is a version of the Gundam Tertium built by Masaki Shido for the final battle. Its new equipment consists of the back-mounted Huge Booster and a Long Beam Rifle. Despite having a fairly standard armament composition, they serve to draw out the Gunpla's hidden performance and give it a special level of power.

As seen during the final battle, the Advanced Tertium can use the same two types of Beam Rifles as the original Tertium.

The Advanced Tertium retains the pair of Beam Sabers used by the original Tertium.

Two half-type shields are attached to the sides of the Huge Booster. They can be removed and used as separate handheld shields or combined into a normal-sized handheld shield.

A ranged beam weapon mounted in each leg's shin armor. The shin armor must be lifted when using this weapon.

A long-barreled beam rifle with a radome sensor on the side. 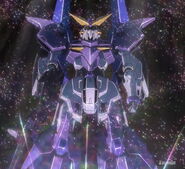 Riding atop Cuadorn with Long Beam Rifle in hand 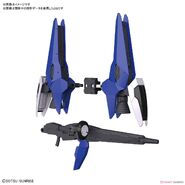