A combat form with emphasis on defense, its Mirror Shield can reflect enemy beam attacks.[1] It can use its Solar Ray Beam signature attack with the accumulated energy in the shield.[1]

In Mobile Suit Gundam AGE Universe Accel/Cosmic Drive, the Warzes Pack was used against Zedas after the Spallow Wear Pack was heavily damaged. 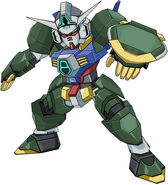 Mirror Shield
Add a photo to this gallery

Retrieved from "https://gundam.fandom.com/wiki/Gundam_AGE-1_Warzes?oldid=446953"
Community content is available under CC-BY-SA unless otherwise noted.