During the period in which this game was released, the interactive movie genre which had begun in 1982 was beginning to subside as PC and console games with realtime rendered 3D were overtaking the genre. While it was the only game produced by Presto Studios in this format, the use of live-action footage featuring real actors combined with computer generated backgrounds and effects, as well as the use of entirely pre-rendered computer graphics was common among the majority of the studio's games. For the Japanese release, the game's voiceovers were dubbed in Japanese featuring the original cast reprising the voices of their characters, with minimal attempts at lip syncing.

The War for Earth was released in Japan on May 2, 1997. The game never officially received an English release, despite being developed by an American company and using western actors. Curiously, though it was released after the 1990 publication of the original Mobile Suit Gundam novel trilogy, the development and release of this game were in fact interestingly before that of even the first film compilation release of the Mobile Suit Gundam trilogy in the U.S., and many years before it or any other Gundam series were licensed in the U.S. The earliness of the release is emphasized by the fact that the official website used many of the old naming conventions that were used in the original novel release such as Zak instead of Zaku, and Shar Aznabull rather than Char Aznable. Also, the marking on the Gundam reads "U.N.T. Spacy" instead of "E.F.S.F.".

For the production of this game, the Gundam's cockpit was redesigned slightly, most notably the inactive monitors use the purple transparency equivalent of green screen. The Gundam and Char's Zaku II were based on the 1/100 scale Master Grade kits released at the time. Many of the games special effects were of extremely high quality as well, but despite this some environments, such as the desert surrounding the "Thor Cannon" are very bland with low resolution. Much of the animations, created with the earliest motion capture technology, appear somewhat cumbersome and the reaction times of mobile suits in some scenes is questionable.

The War For Earth's "gameplay" is that of a multi-option interactive movie which requires the correct inputs at the correct time in quicktime events in order to trigger the solutions to each event in the story. Within these events, four general options are available:

For each Quicktime event, these options appear and must be queued rapidly. Sometimes the cues for such actions are not clear, and on some occasions an entire sequence must be entered with little prompting and only once all actions have been entered is there a verification of whether or not this was the correct course of action. There are myriad chances for failure and the Quicktime events can be quite long before there is a checkpoint.

In order to resume between sessions (rather than simply use a continue function) it is necessary to input a password. Passwords use the controller's face buttons rather than numeric or alphabetic input. As with most password save systems, the passwords could be rather long. The PC version utilizes a save function instead of the former.

The player assumes the first-person view of the Gundam Pilot, the game's protagonist for most of the dialogue while the other viewpoints are that of a cinematic camera. The protagonist is unnamed, but fulfills the same major role as Amuro Ray and like Amuro, is postulated to be a Newtype. The player finds the Gundam during a Zeon attack on Side 7, its original pilot having been killed by falling debris prior to boarding it. He enters the Gundam and destroys a Zaku before being forced out the colony and into space.

After being recruited by Commander Bright, the Gundam Pilot is given a rank insignia and asked to continue in the role. He is then introduced to Ryu (Duke Jose) and Kai Shiden. The player must then defend the White Base against Char Aznable in its descent. Char fails to destroy the Gundam, but uses a ground-based cannon weapon known as the "Thor Cannon" to damage the White Base, causing it to crash in North America. Char then contacts Garma Zabi and informs him of the situation. The White Base lands in a gutted pyramid structure inside a desert city (presumably the Luxor Hotel in Las Vegas) near the Thor Cannon. The player sorties in the Gundam's upper torso fitted onto the Guntank's lower body, as the Gundam's legs were too damaged. After patrolling the city, the Gundam receives a new pair of legs, delivered to the White Base by a Gunperry. The player then breaches the Zeon compound's defenses, destroys a MS-07B Gouf, and along with it, the Thor Cannon.

Garma's forces attack and the Gundam rides a Gaw back to the White Base. The White Base's missiles damage Garma's Gaw when they attack his rear. Char declares his betrayal to Garma who attempts to ram his Gaw into the White Base, but is thwarted by the Gundam. The Gundam Pilot returns to the White Base and is congratulated by Hayato and Bright when Char suddenly attacks the White Base, damaging the Guntank and destroying the Guncannon. The Gundam rams Char out of the ship using the launch catapult. Char grabs the Gundam's beam saber, but realizes that it only runs on the Gundam's power supply before the protagonist damages his Zaku II and forces him to retreat. Gihren Zabi gives a speech at Garma's funeral. The White Base proceeds towards Jaburo, but Char laughs as he is in pursuit and believes victory is soon at hand. 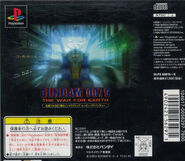 The back cover of the Japanese PlayStation release of TWE.

The Gundam's shield being struck by a Gouf whip, demonstrating the high-quality effects.

The game over screen.