1998-08-01
Gundam Mission to the Rise is a short CGI movie with a duration of 5 minutes directed by Katsuhiro Otomo aired during the Gundam Big Bang Project event (August 1998). The story is settled in the Universal Century, although it's not completely clear whether in late years (after 0093) or in an alternative UC timeline.

Made for the 20th Anniversary of the Gundam Franchise (Gundam Big Bang Proclamation), this three-minute film was originally screened on August 1, 1998 along with the Steam Boy DVD at the event with tickets bought in advance.

In the Universal Century, the Earth Federation enacts an attempt to propel a craft at faster-than-light speeds. Deep in space, near a "warp hole" that looms in the distance, The experimental capsule-like craft is stored inside the experimental facility Lotos in preparation for launch, when the station is suddenly attacked by Zeon forces composed of several Zaku II's in an attempt to destroy the launch facility. Three Gundam-type (similar in design to the NT-1) MS are deployed to defend the facility, however, they are all destroyed along with the Lotos, but not before the craft can be successfully launched and escape the exploding Lotos. As the craft escapes, a similar vehicle operated by the Zeon forces is launched nearby from a platform and chases the test craft. Both craft begin to separate from their Launch Escape System and the machine launched from the Lotos is revealed to be a white two-seater mobile suit equipped with a beam saber and shield. The Federation MS and the Zeon craft speed towards the "warp hole" and enter it, however, the fate of these machines and their pilots are unknown. 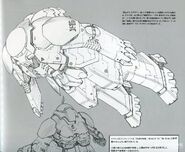 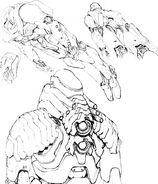 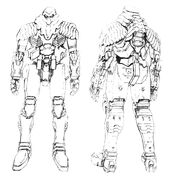 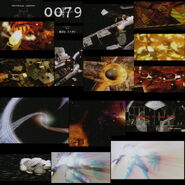