The unit is battle-worn, and has been repaired with many junk-parts in order to maintain a barely-humanoid shape with different arms and legs. Its front armor, for instance, is actually the heel of a AMX-014 Döven Wolf. The head remains disguised as well, and yet the body and double beam-rifle (and the pilot) strongly hint that the unit is indeed the ZZ Gundam.

In the year UC 0136, the Gump would be used by Grey Stoke to battle the Amakusa, where its leg would get destroyed. The same unit, which clearly received further repairs (the leg has been changed to a part similar to a prosthetic leg integrated with a machine gun), was also seen in the Mobile Suit Gundam V side story, written by the same author as Skull Heart. This time, the pilot is almost 15 years older. Its head was still disguised, but was forced to fire its hidden High Mega Cannon, breaking apart the disguise to reveal the head of Enhanced ZZ Gundam. The suit's power was not enough to support the six decades old cannon, and could only light up the battlefield. Still, it revealed the true Zong from its illusions, and helped Uso Ewin defeat the enemy. The Gump met its final moments and exploded due to power irregularities in the High Mega Cannon. Grey Stoke escaped using the Neo Core Fighter, and referred to the Gump as his brother.

Firing a beam from its peg leg

Crushing a mobile suit with its "claw" 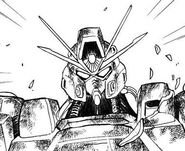 Firing a beam from its "High Mega Cannon" 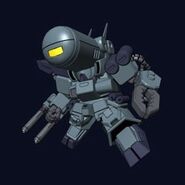 Retrieved from "https://gundam.fandom.com/wiki/Gump?oldid=498304"
Community content is available under CC-BY-SA unless otherwise noted.