Template:Infobox/Mobile Weapon Ver.2The Grand Gundam is a DG-Cell infested mobile fighter and one of the Four Heavenly Kings, piloted by Gentle Chapman. The unit appeared in Mobile Fighter G Gundam. 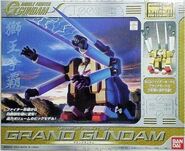