Gopp (ゴップ, Gopp?) is a fictional character from the Mobile Suit Gundam television series and the MSV-R: The Return of Johnny Ridden manga.

Gopp is an Earth Federation Forces general stationed at Jaburo. When White Base arrives at Jaburo, he meets with Bright Noa and Mirai Yashima multiple times, and eventually orders them to head to space along with the Tianem's fleet. Gopp expresses his sorrow over the death of Mirai's father, and muses that the war may have been avoided had he not died.

After the One Year War, he retired from the military and became a member of the Federation Council. He survived the decade of conflict after the One Year War without joining either the Titans or AEUG, and as a result became the largest faction in the Federation Council. For his actions, he himself wants "the survival of the human race" regardless of whether they are Spacenoids or Earthnoids, and says that he does not need a plant to maintain and improve the Earth's environment, which is important for Earthnoids, but he also understands that he is a parasite of human society, and that the benefits he has gained are based on human society.

MSV-R: The Return of Johnny Ridden

He is laying the groundwork for Oxner Cliff's election, but at the same time he is monitoring the "survivors of the Chimera Corps". He has taken Ingrid 0 in as his ostensibly "adopted" child, and says that "I've never had a daughter before, so it's a new experience for me every day," so he takes her around everywhere. He does this to deceive the people around him into thinking that he is a snob who is happy to adopt a little girl, to catch his political opponents off guard, and to determine whether he is a person who can be fooled by superficial things. In addition, he often talks about Ingrid's future (where she will marry), although it is unclear how serious he is about it. He wants to destroy the Minaret and is at odds with Oxner on that point, but he is willing to help Oxner with a better plan for the survival of the human race, even if he disagrees with him.

He supported Ingrid and Yazan Gable with all the power he could muster, and after the Jaburo invasion, he talked with Yazan and Ingrid, and told them about the fact that there was no information on the origin of the three Musai cruisers that were secretly in satellite orbit, and the rumor that a certain force was gathering personnel and funds to build up their forces, and various other conditions. Based on the conditions, he told them that the Musai cruisers could be a force led by Char, and made arrangements to send them into space. After the battle in Confeito space, he decided to go up to space and provided Ingrid, Yazan and others whose machines had been damaged in Luna II with new machines and as much armament as he could give them, using the power and connections he had available in the immediate situation. He is also convinced, based on Ingrid's and Yazan's words, that Char Aznable is working to acquire the Minaret. 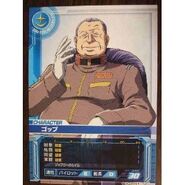 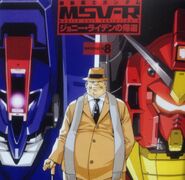