Glemy is a young officer in the Neo Zeon army led by Haman Karn. He professes himself to be a member of the Zabi bloodline, and has made it his cause to revive the Zabi family. Unlike the other soldiers of Neo Zeon, Glemy is honorable, chivalrous, and overall goofy. He condemns the use of underhanded strategies in battle, such as using hostages, and believes in refined manners, believing both men and women should act and behave in a sophisticated demeanor, while thinking lowly of those who do not. Glemy's good nature also makes him very gullible, shown by him being deceived numerous times by others, on top of that his acts of chivalry more than often make him appear as a fool. Glemy has another side to him though; beneath his good and foolish demeanor he has shown that he can be heartless and manipulative.

This was demonstrated by his manipulating of Elpeo Ple's memories to make her a merciless soldier, and then abandoning her when she was defeated and appeared as though she was going to die. As such Glemy can be compared to a horse breeder: raising his subordinates with care, but deserting them when they do not meet his expectations or fail him. Despite this, all of his traits do make him a good leader, shown by how others willingly follow him and are inspired by him. His other most recognized trait is his unrequited love for AEUG pilot Roux Louka, which shows that Glemy is both a romantic, wanting to be a knight in shining armor and "rescue" Roux from the AEUG, and tenacious, as he continued try and form a relationship with Roux, despite her having rejected him numerous times.

Although he was only 17 years old, Glemy was highly valued by Haman due to his status as a member of the Zabi family, and was assigned as a MS pilot to the Endra Squadron led by Mashymre Cello when he first entered the First Neo Zeon War as a soldier. On one of the attacks against the AEUG flagship, the Argama, Glemy meets a lost, female pilot called Roux Louka. Instantly smitten by her, Glemy volunteers to take her back to the Endra, but upon return is tricked into releasing her revealing to him that she is with the AEUG. Glemy is unfazed by this and continues to harbor romantic feelings for her; he also takes part in numerous attacks against her and the Argama, where in one battle he rescues Leina Ashta, believing her to be Roux. Rather than have her imprisoned, Glemy cares for Leina as a sort of mentor, teaching her how to be a sophisticated woman by having her study music, dance, and the arts, though Glemy does this only to present a good public image of Neo Zeon.

When the war shifts to Earth, Glemy comes to realize that Haman is becoming suspicious of him, but he thinks it only as a test of his capability as a leader. During his pursuit of the Argama and the Gundam Team in Africa, Glemy meets the African Resistance, The Blue Team, and briefly joins them, sympathizing with their feelings. While there he also meets up with a lost Roux, who rejects Glemy's help and advances. When Neo Zeon troops begin attacking the Blue Team, Glemy comes to their rescue and rallies them and other resistance movements against the recently appeared Gundam Team. Despite his excellent command, the Blue Team is all but wiped out, though one member takes a fatal blow that was meant for Glemy. Their words have a profound affect on Glemy for the rest of the series, as they refer to him as the one true leader of Zeon, because of his nature and beliefs; these words, combined with Haman's recent actions, cause Glemy to secretly defect and begin amassing his own army.

Glemy begins his rise to power by cloning Elpeo Ple, resulting in his first powerful cyber newtype subordinate: Ple Two. Among recruiting other Zeon soldiers, Glemy is also able to commandeer the MRX-010 Psycho Gundam Mk-II and have Ple Two use it to great use in the aftermath of the Dublin Colony Drop. After Haman returns to space, Glemy finally starts his rebellion (episode 43) by attacking Haman's forces at Core 3, effectively starting a civil war among Neo Zeon. His forces put up an excellent fight, using powerful mobile suits such as the AMX-014 Doven Wolf and the colossal NZ-000 Queen Mansa, however a combination of Ple Two's hesitation and interference from the Gundam Team ultimately bring about Glemy's downfall, as Ple Two defects to Judau's side and Roux kills Glemy by blasting him in the Queen Mansa with the Zeta Gundam's beam rifle. 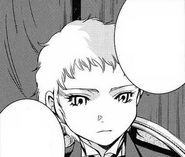 Glemy Toto in the week before the fall of Zeon 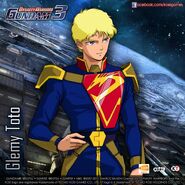