This article needs to be cleaned up to conform to a higher standard of quality.
Notes: Need to rewrite in in-universe past tense perspective.

Gjallarhorn is a peacekeeping organization established by Agnika Kaieru and the nations of Earth, and its origin can be traced back to the Calamity War era. To prevent humanity from facing extinction due to the Calamity War, a group of like-minded individuals from across all nations and power blocs gathered together to end the fighting. To that end, they developed the Alaya Vijnana System and the Gundam Frames to possess the decisive edge necessary to end the war. They later became the organization known as Gjallarhorn. Gjallarhorn successfully ended the Calamity War and used their military power to maintain peace, and keep an independent eye on the four economic blocs; Arbrau, the Strategic Alliance Union, African Union, and Oceanian Federation, that they established with the cooperation of Earth leaders.

In recent times, however, Gjallarhorn will use the means of violence to maintain peace. They possess many mobile suits and monopolized the technology required to produce Ahab Reactors. Unfortunately, the organization became corrupt with many leaders and officers now willing to use bribery and intimidation, and they interfere in affairs beyond their jurisdiction to remain in power.

The Commander of the Mars Branch, Major Coral Conrad staged an assault on the CGS base to kill Kudelia Aina Bernstein so the tensions between Earth and Mars thicken and help him gain favor with the Earth Branch. After failing, he sent Crank Zent to eliminate the CGS base leaving no evidence about their defeat, but this also failed. McGillis Fareed and Gaelio Bauduin arrived at the Gjallarhorn Mars Branch headquarters for inspection. Coral attempted to bribe them but wad rebuffed by McGillis. During a sortie around Mars' orbit, Coral was defeated by Tekkadan.

Despite this, to maintain the status quo, Gjallarhorn continued to harass Kudelia and her escort, Tekkadan, and attempted to wipe them out through intermediates and tried to capture her on the Dort Colonies. However, thanks to the machinations of McGillis Fareed, Gjallarhorn failed to prevent Kudelia from reaching Arbrau; instead, Gjallarhorn's attempt to interfere with Arbrau's prime minister election was exposed, leading to its neutrality among the economic blocs being questioned. This led to all four economic blocs deciding to develop their own military forces.

Two years following the Battle of Edmonton, Gjallarhorn enters into a period of instability. With their shield of neutrality gone, the organization lost much of its respect and trustworthiness in the eyes of the world. The situation eventually devolves into a full-blown civil war, with McGillis Fareed and his allies rising in revolt against the Seven Stars. He is opposed by the Arianrhod Fleet and its commander, Rustal Elion. Despite capturing Gjallarhorn headquarters, taking a number of the Seven Stars hostage, as well as claiming Gundam Bael for himself, McGillis' forces are defeated by the Arianrhod Fleet, and McGillis himself is killed by Gaelio Bauduin.

In the years following the "McGillis Fareed Incident", Gjallarhorn was reformed into a more democratic organization with Rustal Elion as its new leader. Working together with the Martian Union, both groups hope to keep the peace and prevent further exploitation of the weak by signing the Human Debris Abolishment Treaty.

Gjallarhorn is a powerful organization with substantial influence both on Earth and in Space, controlling the Ariadne communications network that makes long-distance space travel and communication possible in spite of the interference caused by Ahab reactors. Gjallarhorn has four known departments: Inspection, Regulatory, General Affairs and Police.[1] The Inspection Bureau is an elite group consisting of the organization's top executives and those who have blood ties to the Seven Stars, and its primary function is to conduct internal inspection of other departments.[1] It has its own battle cruisers and mobile suits, and can use them without requiring permission from the Regulatory Bureau.[1] McGillis Fareed and Gaelio Bauduin were introduced as officers of the Inspection Bureau.

The Regulatory Bureau is the organization's military unit and is directly involved in peacekeeping operations through the use of battle cruisers and mobile suit teams.[1] When people refer to Gjallarhorn, they are usually referring to the Regulatory Bureau.[1] The Regulatory Bureau has several fleets including the powerful, moon-based fleet known as Arianrhod Fleet.[1] Otherwise known as the Outer Lunar Orbit Joint Fleet, it is the Gjallarhorn's largest fleet and is dedicated to protecting the Earth Sphere.[1] There is also the Outer Earth Orbit Regulatory Joint Fleet, which is tasked with defending the Earth's orbit but it is viewed by some as just being around for show.[1] In fact, due to the rapid response of the Arianrhod Fleet to any threats to Earth, the Outer Earth Orbit Regulatory Joint Fleet had little to no sortie record.[1] The Mars Branch is also a part of the Regulatory Bureau.[1] Coral Conrad was the commander of the Mars Branch, while Ein Dalton, Crank Zent and Orlis Stenja were officers in the Mars Branch.

The General Affairs Bureau is responsible for accounting and personnel affairs, while the Police Bureau is responsible for police operations.[1] Each department have their own ranks, which are given based on the roles performed.[1] There seems to be some mistrust within Gjallarhorn, especially between the Mars and Earth branches, as Earth soldiers consider Martian soldiers inferior. According to Naze Turbine, the Gjallarhorn forces in the Earth sphere (which includes the space colonies) are much better trained and motivated than those of the Mars and Jupiter branches.

The Seven Stars (セブンスターズ, Sebun Sutāzu?) is a group of seven family clans that have managed Gjallarhorn for years. A family's rank within the Seven Stars is closely related to the "Order of the Seven Stars", a medal given to those who defeated a Mobile Armor.[2] Interestingly, the family of the famous Calamity War mobile suit pilot and one of Gjallarhorn's founder, Agnika Kaieru, is not in the Seven Stars.[2] It has been suggested that this was because all members of the Kaieru family died during the Calamity War, or that the war caused irreparable damage to the family.[2] The top-ranked families in the Seven Stars were believed to be second only to Agnika during the war, and they maintained their influence even after 300 years have passed since the end of the war.[2]

In P.D. 323, the leading family in the Seven Stars is the Issue family. The head of the Fareed family, Iznario Fareed, tried to gain more power by turning himself into the legal guardian of Carta Issue (the Issue family's lone daughter), and by arranging the marriage of his adopted son, McGillis Fareed, to the Bauduin family's daughter, Almiria Bauduin. He also had a secret pact with Henri Fleurs, and supported her election campaign to be the prime minister of Arbrau. However, his plans were foiled by McGillis, who was also trying to gain more power so as to fulfill his own goals of reforming the Gjallarhorn that he felt had become corrupted. Iznario was then forced into exile, and McGillis became the new head of the Fareed family. To achieve his goals, McGillis also sacrificed the life of his friends and comrades including Gaelio Bauduin (Bauduin family's heir and Almiria's brother) and Carta. All these have caused a disruption in the power balance within Gjallarhorn and allowed McGillis to rise to power.

The ranking within the Seven Stars and the "Order of the Seven Stars" medal, which has naturally became difficult to obtain in the post war era, became an issue in P.D. 325, when the Mobile Armor known as Hashmal was discovered in Mars by Tekkadan. McGillis was close to the Tekkadan, and the head of the Elion family, Rustal Elion, and Kujan family, Iok Kujan, suspected that he was after the medal so as to enhance the Fareed family's rank within the Seven Stars. This led to Iok's reckless action on Mars that awakened the dormant Mobile Armor, which was then defeated by the Tekkadan. The Seven Stars ruling system is eventually disbanded after the losses of the Issue, Fareed, and Kujan families.

The families and their known members include:

The Gundam Frames belonging to the Seven Stars are stored in an altar deep within Gjallarhorn's headquarters on Earth, Vingólf, and kept in the same conditions as during the Calamity War[2][3]. In particular, the ASW-G-01 Gundam Bael, piloted by the legendary Agnika Kaieru, is viewed as a symbol of the Gjallarhorn and Seven Stars[2].

Gjallarhorn has a rank structure not based on insignia but by uniform and colors. In the Mars branch, the officers wear a light gray uniform, while the branch commander wears a red uniform. For the Earth branch and the Inspection Bureau, the officers wear a blue and white uniform, while inspectors like McGillis Fareed and Gaelio Bauduin wear a blue and white uniform with a cape over the left side and a small sword on the left as well. Meanwhile, members of Arianrhod wear a teal variation of the uniform. Carta Issue, as commander of the Outer Earth Orbit Regulatory Joint Fleet, wore a white-and-green commander's uniform, while her close subordinates wore green uniforms, with the earth-based part of the fleet wearing the blue and white uniform. Once the unit was assigned to the command of McGillis Fareed, they adopted blue uniforms, while McGillis wears a slight variant of his previous white-and-blue uniform. The higher the ranking, the more lines a soldier will have on his/her cuffs and his/her shoulders, which are of gold color for all uniforms. A higher ranking commander will also have the front flap of the uniform folded back to the left in a triangle. For foot soldiers, there are two uniforms; one consists of a plain blue and white uniform with a visored helmet while the other is a black and gray sealed suit with body armor and a closed helmet intended for heavy combat.

Economic blocs which Gjallarhorn watches over

Roads and residential area in Vingolf 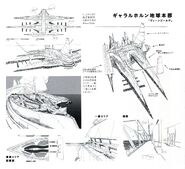 Office of Iznario Fareed, one of the Seven Gjallarhorn Stars, on Vingolf

A Gjallarhorn soldier with black uniform