Originally, Reina was a kind person, addressing everyone in a cheerful manner. Following Lieutenant Commander Girard Fornell's death (whom Reina was in love with) in an accident, her personality took a dark turn. As Girard Spriggan, she was defined by her hatred of the Federation for the part they played in Fornell's death, leading her to defect to the Vagan to exact her revenge.

Girard is an excellent pilot, being able to shoot down several mobile suits in a matter of seconds and fight evenly against Gundam-type suits. She also possesses X-Rounder abilities, which enable her to sense an opponent's next move and control her Thieleva's Bit weapons. However, as a result of the accident she was involved in, Girard cannot control her X-Rounder abilities for a long time. When she went berserk, she was able to exert pressure on the other X-Rounders near her, blocking their abilities and taking control of their remote weapons. In this state, Girard cannot separate friend from foe and attack everyone indiscriminately.

Her real name was Reina Spriggan and was originally a test pilot for the G-Bouncer Deos. Reina eventually met Girard Fornell, another test pilot. At first Reina saw him as a friendly rival, but their relationship soon grew into love.

One day, there was an "accident" while testing a new X-Rounder system developed by the Earth Federation. This new technology was an attempt to fully utilize X-rounder abilities. However, the system ran wild; both Reina and Fornell were immobilized and couldn't control their X-rounder abilities. Fornell's G-Bouncer Deos crashed into an asteroid and he was killed in the crash. Reina, on the other hand, crash-landed her G-Bouncer Deos into an asteroid and was heavily injured.

While she was recovering from the accident, one of the researchers gave her a recording that revealed that the researchers raised the output beyond safety limits and the system didn't actually run wild. This was due to a desperate attempt to produce quick results. The blame for the accident was put upon Fornell, claiming that he did not follow orders, instead of actually blaming the system itself (or its researchers).

Reina eventually confronted her commanding officer with evidence about the accident, but he silenced her and destroyed the evidence. He then told her that she was promoted two ranks from lieutenant commander to captain. Reina took up Girard's first name and vowed to get revenge for his death. Her hatred for the Federation and drive for revenge were her main reasons for defecting to the Vagan.

After the destruction of Earth Federation's command center Big Ring in A.G. 164, the top brass began research on upgrading the AGE System and assigned Girard to pilot the AGE-1F Gundam AGE-1 Flat. However, they were unbeknownst to the fact that she and Luna Base commander Aaron Simmons had defected to the Vagan and allowed the base to be easily taken over. After defecting in A.G. 164 she was seen piloting the XMS-005 Thieleva.

Girard is eventually joined by Zeheart Galette and Fram Nara to combat the three Gundam units piloted by Flit Asuno, Asemu Asuno, and Kio Asuno. Her powers, however, ran wild and she took control of all of the bits and funnels in the area, while also applying pressure on all the X-Rounders around her. As her powers became out of control, she attacked both enemies and allies alike. She was later shot down by Flit Asuno in the new AGE-1G Gundam AGE-1 Glansa.

Moments before her death, she regretted that she could not do anything significant to the Federation. However, Zeheart told her that she fought for what she believed was justice and acknowledged her as a true warrior (communicating via X-Rounder powers). She, in turn, thanked him for what he had done for her before dying. 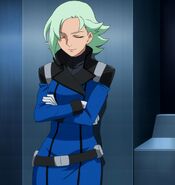 Girard Spriggan in a Pilot Suit