Ginias Sahalin (ギニアス・サハリン, Giniasu Saharin?)[1] is the antagonist of Mobile Suit Gundam: The 08th MS Team. He is a technical officer in the Principality of Zeon's military, and is the older brother of Aina Sahalin.

While he initially appears noble, his actions reveal him to be someone extremely ruthless, manipulative and who will pursue his goals at any cost.

At 12 years old, Sahalin was severely affected by cosmic radiation exposure and subsequently contracted a rare and incurable disease, requiring him to take medication to maintain his health. Severe progression of the disease was evident during the completion of the Apsalus III, manifesting as hemoptysis.

Ginias was one of Zeon's top R&D scientists deployed to the surface of the Earth towards the end of the One Year War. His contribution to the war effort upon his assignment to the Southeast Asian region was overseeing the "Apsalus Project." The project's stated goal was to develop a mobile armor that possessed a powerful beam weapon strong enough to rend the Earth Federation Forces' subterranean military headquarters at Jaburo, as an alternative means of attack after the failure of Operation British. Though the project was initially met with resistance from some high-ranking Zeon officials on Earth, it was greenlit by Degwin Zabi personally and support for the project (albeit grudgingly from some Zeon field commanders on Earth) came pouring in upon making planetfall. Ginias' sister, Aina, served as the test pilot for the Apsalus Project.

With the defeat of the Zeon forces in Operation Odessa, support for the completion of the Apsalus Project was halted and diverted to the evacuation of Zeon forces into space. Unwilling to let the project go unfinished when it could turn the tide of the war in Zeon's favor, Ginias secretly made steps to ensure the Apsalus would be finished in time for the highly anticipated final stand against the Earth Federation Forces that were now amassing around the remaining Zeon mountain fortress in Asia. To this end, he secretly kills Yuri Kellerne, who was supervising the evacuation of his men, by blowing up the cavern entrances to the base as well as killing the scientists working on the Apsalus project.

Ginias forcibly starts the Apsalus III against the Federation forces with Aina at the controls. However, Aina refuses to go along with his plans, and joins with Shiro to take down the Apsalus, killing Ginias in the process. 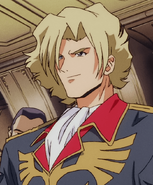