Gilbert Durandal (ギルバート・デュランダル, Girubāto Deyurandaru?) is a fictional character and the main antagonist in Mobile Suit Gundam SEED Destiny. Gilbert is the chairman of the PLANT Supreme Council. Durandal seems to have the agenda of ending all conflicts between humans, especially the chasm between the Naturals and the Coordinators, i.e. the Earth and the PLANTs.

Above all, Durandal seeks peace and does not follow the genocidal intentions of Patrick Zala and his followers. His words are meant to inspire people to follow his ideals of a perfect world without war. Durandal is seen as a cunning strategist who always thinks ahead of his adversaries. However, Durandal is also willing to eliminate those who are not committed to his cause or have not been swayed to his side, such as Athrun Zala. Durandal's personal goal for a world without war comes in the form of his mysterious Destiny Plan.

Although not much about Durandal’s past is revealed, it is known that he was once working as a geneticist and is a specialist in DNA analysis. He was also a friend of Rau Le Creuset, and appears to be the person who gave Creuset the pills to stop the pain from his genetic malfunctions. In the past, he also had a relationship with later Minerva captain Talia Gladys, but Gladys left him because she wanted a child. Nevertheless, it appears that in C.E. 73, they are still sleeping together (which is once shown when they were sharing quarters on the Minerva).

Incident at Armory One

In October C.E. 73, Durandal met with Orb’s representative Cagalli Yula Athha to discuss the rearmament of ZAFT at the Armory One colony, but this meeting was interrupted when three prototype mobile suits of ZAFT were stolen by three Extended pilots of the Phantom Pain. Durandal later stayed on the Minerva while the ships is chasing the Girty Lue of the EA.

When the Minerva tries to prevent the wreckage of the destroyed Junius Seven from falling onto Earth, he returns to PLANT and after the wreckage's drop, immediately organizes aids, bringing medical supplies and food on Earth. Nevertheless, PLANT is blamed for the colony drop and although Durandal tries to negotiate PLANT is attacked by nuclear missiles and so the Second Alliance-PLANT War starts.

To calm the people Durandal calls for help from Lacus Clyne look-alike Meer Campbell to act as the true Lacus and so calm down the anger of the people of the PLANTS so that genocidal intentions would not escalate. Also during a meeting with Athrun Zala, who expressed his desire to do something to repair the damage created by his father's ideals, he is able to make him come back to ZAFT and also makes him a member of FAITH. He also follows the path of the Minerva while he is on PLANT.

Before the Battle of Berlin, he saves Shinn Asuka from being punished after he violated military orders, since his skills are needed in order to fight the disastrous attacks of the GFAS-X1 Destroy Gundam (from which he holds plans although it is unknown how he got them).

He makes a speech to the entire world where he reveals the existence of LOGOS and that this organization is behind the whole war and Blue Cosmos. Any footage of Archangel and the Freedom Gundam fighting against the Destroy were omitted from his speech, propaganda to further spread the image that the ZAFT military alone was responsible for the victory. Casting further doubt on his intentions is his attempt to eliminate Athrun, shortly after his refusal to pilot the new ZGMF-X666S Legend Gundam, and as he was coming to terms with the supposed death of his friend Kira Yamato.

It is also heavily implied that the Armory One theft, the Break the World incident, and the failed assassination attempt on the real Lacus Clyne are all his works or authorized by him. Adding to this controversy is the fact that he was fully aware of the existence of the Destroy Gundam as well as the Moon-based Requiem energy cannon but no direct evidence in the episodes links Chairman Durandal to the aforementioned events, although interviews with a Destiny scenarist tend to confirm that assumption. It should be noted that at a point in the series (Destiny, phase 39), the profile of the terrorist behind the Break the World incident is shown right after Durandal's.

Although it is easy to assume that there is a causality link between the two pictures (the terrorist's profile was mysteriously erased, bringing other questions about the matter), the scene nevertheless spouted a series of theories according to which Durandal actually compelled the Earth Alliance to steal the three Millenium-series Gundams and ordered a loyal faction of Coordinators (former Patrick Zala followers) to throw the wreckage of the destroyed Junius Seven off its normal orbit onto Earth so that he could create a climate of terror and war on Earth, paving the way to ZAFT's return on Earth and its portraying the good side. The ultimate goal of this maneuver, according to those theories, is to enable Durandal to implement the Destiny Plan on the entire human population with minimal opposition, by gaining its trust first - thanks to the climate of insecurity caused by the return of hostilities and the damages caused by the wreckage of the destroyed Junius Seven.

A research notebook recovered by Martin DaCosta on the abandoned Mendel space colony revealed that Durandal has something in his mind called the Destiny Plan, and it is related to his passionate speech to the entire world about defeating the warmongering LOGOS, and creating a new world where war no longer exists. The Archangel's crew think his plan would be to implement a new world order where every human is given the role for which they are best genetically suited at birth, and this would fulfill Durandal's ideal of perfect genetic determinism, as this should be the ultimate goal of all Coordinators. Under this theory humans will no longer fight against others for things that they wish, since each person's destiny are predetermined at birth. In this New World, genes would be the King, and Durandal would be the Bishop (in terms of chess).

After Lord Djibril's death, Durandal revealed the Destiny Plan to the world. However, the only opposition towards it was Orb, the Kingdom of Scandinavia and the Atlantic Federation. Durandal authorized the use of a rebuilt Requiem to eliminate Joseph Copeland at the Arzhachel base. But as he turned his eyes on Orb, the Terminal forces, along with dissident ZAFT vessels and some of the remaining Earth Alliance fleet gathered to destroy the Requiem. Durandal branded them "enemies" of mankind, generally as remnants of LOGOS.[1]

However, the tide of battle turned when the Minerva was sunk, the Requeim was destroyed and the mobile fortress Messiah's positron shields was taken out by the Strike Freedom equipped with its METEOR Unit. Follow up attacks by the Strike Freedom and the FFMH-Y101 Eternal led to Messiah suffering further damages. Despite the explosions caused by the attacks, Durandal remained in the command room. He soon came face-to-face with Kira Yamato, guns drawn, and engaged in a debate of ideals. Durandal believed that without him, humanity will descend into war and chaos. Kira, however, believed in a world where they could choose their won future. Before either could shoot, Durandal was shot by Rey Za Burrel, formerly his most faithful follower who had been convinced by Kira's words. His lover, Minerva's captain Talia Gladys, stayed behind in the crumbling fortress to accompany him right till the end. The three of them are later crushed to death by falling debris.[2] (In Final Plus, Special Edition, and the HD Remaster, Athrun also arrived to witness Kira and Durandal's debate, and in the manga, Mobile Suit Gundam SEED Destiny: The Edge, Durandal notices Athrun's arrival and invites him to join their conversation as well.) 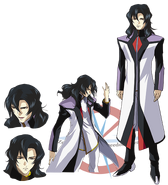