Gihren Zabi (ギレン・ザビ, Gihren Zabi?) is one of the antagonists of Mobile Suit Gundam.

In short, Gihren is best described as ambitious, underhanded, overconfident, and a motivator. As the essential leader of Zeon, Gihren belittles the dwindling power of his father and continuously schemes to turn the One Year War into a total war. Sticking to the homeland of Side 3, Gihren mostly hands orders to his other siblings and expects them to succeed without failure. Though highly talented, this also affects his realism, relying solely on overwhelming firepower and prototype machines to achieve victory.

Granted a high IQ (Intelligence Quotient) of 240, Gihren is a highly gifted and well-educated person. He is also a gifted orator, able to rally the people of Zeon after the death of his brother Garma.

He was one of the key figures in Zeon's independence, participating in political activities from his youth to adolescence, including at the time of Zeon Zum Deikun's declaration of the Republic of Zeon (in 0058, age 14) and his Deikun's death (in 0068, age 24). As of the year 0079, when Degwin Sodo Zabi is virtually retired, he is the de facto supreme leader of the Principality of Zeon (not only the military commander-in-chief, but also the highest political authority). Unlike his younger brothers (Dozle and Garma), who compensated for their lack of talent with the "Zabi bloodline," he is one of the most gifted revolutionaries of the century, with an intellect, political skill, and charisma that surpass those of his father Degwin. He and Kycilia are also political rivals, and they are at odds with each other. However, Gihren has absolute confidence in his own talents and political ideas, and he half-heartedly leaves Kycilia alone as she plots behind his back.

He is also an excellent agitator, and he is the one who helped Deikun create the soil for fostering a "culture" that would give hope (spiritual wealth, or the margin for acquiring such wealth) to the "backward" Spacenoid population of Side 3. In the year 0071 (age 27), he radically reorganized "Zeonism," and announced the "dominant theory of human survival," which asserted that the Spacenoids were the chosen people who had entered the universe. He made maximum use of this theory to enhance the national prestige of Side 3. In the same year, he also made the most of his resources, both human and material, to help lay the groundwork for the Principality of Zeon's War of Independence (One Year War), including the development of the Minovsky-Ionesco thermonuclear reactor by employing Dr. Trenov Y. Minovsky, who was a snubbed figure in the academic world at the time.

Of course, his decision to start the One Year War was accompanied by the approval of Degwin, but Gihren went far beyond Degwin's intentions and focused on seizing control of the Earth Sphere itself. His ultimate goal was based on the ideological ideal of "limiting" the Earth's population to 50 million (the level of the first year of AD) in order to regenerate the Earth's environment, and to permanently develop humanity as a species by raising all other technologies and cultures to the lunar cities and space colonies.

Needless to say, this ideal was noble, and because of this, it was absolutely incompatible with existing capitalism and the upper ranks of the Earth Federation government, which sat comfortably atop the system. Therefore, Gihren, with a strong resolve to make the One Year War the "last war" for mankind, dared to launch nuclear and poison gas attacks on Side 1, 2, and 4, which were inhabited by his fellow Spacenoids. Furthermore, in order to capture Jaburo, the headquarters of the Earth Federation Forces, he adopted a strategy of an early settlement by dropping colonies (Operation British), knowing that it would cause enormous damage to the global environment.

At the end of the One Year War, he planned to engage the Federation forces in a final decisive battle at A Baoa Qu, but Degwin, on his own initiative, sat down in the Great Degwin and went to peace negotiations with the Federation forces. Having completely given up on his old father, who did not follow his own strategy, Gihren reads the path of the Great Degwin as the course of the advance of the First Fleet, the main force of the Federation Forces led by General Revil. In an attempt to settle the matter before the peace negotiations begin, he moves his plan up significantly, sets the Solar Ray to the final "Gel-Dorva target," and orders its launch at 21:05, killing both General Revil and his father, Degwin. However, after receiving a report that the identification signal of the Great Degwin was confirmed from the Gel-Dorva line, Kycilia learned that Gihren had killed their father, and on December 31, 0079, he was shot dead by Kycilia while conducting operations during the battle of A Baoa Qu. Gihren's sudden death temporarily halts the chain of command at A Baoa Qu, leaving a fatal opening for the Federation forces, and these "family disturbances" are one of the reasons for Zeon's defeat in the war.

Even after his death, uprisings continued by a group of fervent followers of Gihren's ideology. In the year 0083, the Delaz Fleet, a remnant force of the Zeon Army led by Aiguille Delaz, rose up and carried out a nuclear attack on a ship-viewing ceremony held in the Confeito (Solomon) space, followed by a colony drop in North America (Operation Stardust). The idea that the Earth Sphere must be ruled by a chosen people also had a profound influence on later Titans leaders such as Jamitov Hymen.

Gihren's own father compared him to Hitler, which may not be completely inaccurate. Like Hitler, Gihren appeared to believe in a 'survival of the fittest' mentality and that the "Superior Race" should rule over the inferior ones (the superior race being Spacenoids from Side 3 and the inferior the Earthnoids). He also shared Hitler's gift for oratory and manipulation, taking the reins of power from his father behind the scenes the way Hitler did with the German president of his day, Paul von Hindenburg. Gihren even adopted the Nazi salute for himself ("Sieg Heil", meaning "Hail [to] victory", became "Sieg Zeon", meaning "Victory [to] Zeon").

Unluckily for Gihren, he also had a number of Hitler's personality flaws, such as an over-reliance on miracle weapons to turn the tide against numerically superior foes. By this logic, the assorted super weapons such as the MA-08 Big Zam and "Apsaras Project" Mobile Armors can be seen as analogies of the V1 and V2 rocket-bombs used by the Third Reich. Like Hitler, he also greatly overestimated the capability of his forces. This was shown during the final battle of the One Year War, when despite his claims of superiority his forces were overcome by those of the Federation.

In an effort to circumvent the Antarctic treaty (forbidding nuclear, biological, and chemical weapons and colony drops on Earth), Gihren's most ambitious project was the Solar Ray cannon. This consisted of a hollowed-out colony cylinder rebuilt into a giant carbon dioxide laser with the ability to destroy entire fleets. Gihren learned that Degwin, tired of the war, decided to take his personal fleet to a designated area in space where he would meet the fleet of Earth Federation representative General Revil and discuss peace negotiations. Gihren arranged for an accidental firing of the Solar Ray which destroyed Degwin and Revill's entire fleet. However, this may have cost Gihren one of his tactical advantages, as the premature firing burned the laser out.

Kycilia, eventually learning that the death of her father was no mere accident, personally executes Gihren for the crime of patricide. As a result, she takes over during Battle of A Baoa Qu. This resulted in many Gihren loyalists withdrawing from the battlefield, which ultimately contributes to Zeon's disastrous defeat at A Baoa Qu.

-The following is taken from Book#1 of the Mobile Suit Gundam novelization by Yoshiyuki Tomino.

We have lost a hero to our glorious and noble cause, but does this foreshadow our defeat? No. It is a new beginning. Compared to Earth Federation the national resources of Zeon are less than one thirtieth of theirs. Despite this major difference, how is it that we have been able to fight the fight for so long? It is because our goal in this war is a righteous one. It’s been over fifty years since the elite of Earth, consumed by greed took control of the Earth Federation. We want our freedom. Never forget the times when the Federation has trampled us! We, the Principality of Zeon, have had a long and arduous struggle to achieve freedom for all citizens of our great nation. Our fight is sacred, our cause divine. My beloved brother, Garma Zabi, was sacrificed. Why? The war is at a stalemate. Perhaps many of you have become complacent. Such a lack of compassion is ---.

The Earth Federation has polluted our most cherished planet for their own greed. We must send them a message, but not composed of words. We have wasted too much time with words. We need action now. The earthside elite must be taught a strong lesson for their evil corruption. This is only the beginning of our war. We have been putting more and more money into our efforts towards making our military stronger than ever. The Earth Federation has done the same.

Many of your fathers and brothers have perished valiantly in the face of a contemptible enemy. We must never forget what the Federation has done to our people! My brother, Garma Zabi, has shown us these virtues through our own valiant sacrifice. By focusing our anger and sorrow, we are finally in a position where victory is within our grasp, and once again, our most cherished nation will flourish. Victory is the greatest tribute we can pay those who sacrifice their lives for us! Rise, our people, Rise! Take your sorrow, and turn it into anger! Zeon thirsts for the strength of its people! SIEG ZEON! 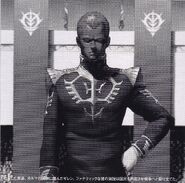 As seen in Gundam Evolve

Gihren Zabi as seen on Mobile Suit Gundam: The Light of A Baoa Qu

Gihren Zabi as seen on Gundam Pilot Series of Biographies: The Brave Soldiers in the Sky