The heroine of the story, she is the young mistress of a millionaire founder of a large insurance company. She befriends Kenneth Sleg and Hathaway Noa, the latter who she quickly developed feelings for, aboard the shuttle Haunzen during a trip to Hong Kong. She becomes fascinated with the man named Mufti, leader of the anti-Federation organization of the same name. She possesses a strange, almost prophetic intuition and is treated as the "Goddess of Victory" of the Circe unit. After the failed attack by Mufti on the Federation assembly in Adelaide, she moves to Kyushu, Japan along with Kenneth. 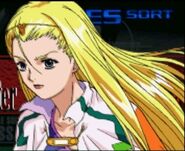 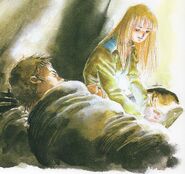 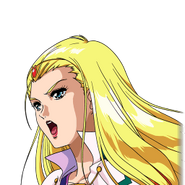 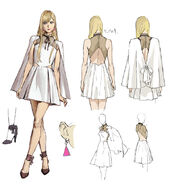 Concept art from Hathaway's Flash (2020) by Pablo Uchida
Add a photo to this gallery
Retrieved from "https://gundam.fandom.com/wiki/Gigi_Andalusia?oldid=459633"
Community content is available under CC-BY-SA unless otherwise noted.