While working in Tanto Tempo, he was a critic of Ted Morugaton's leadership style and vision. This lead him to come under suspicion of being the man behind Daddy Ted's assassination, while the real instigator, Rosario Leone, would avoid suspicion. Unlike Rosario, who is eager to obtain the top position in the company, Gianmarco would rather not be tied down with the responsibilities of such a position. This is the reason why he declines Liarina's request to become Tanto Tempo's new leader.

Gianmarco is also a skilled mobile suit pilot, and personally customizes his machines, the Kallisto and Regal Lilly, using them to fight pirates in the Jupiter sphere.

Gianmarco is also known to indulge in pleasures, include drinks and women, and isn't shy about getting into fights.

Gianmarco Salerno was a member of Tanto Tempo as the head of its transportation division. After the assassination of Daddy Ted, he hires the Hakuri siblings to track down and capture his Ted's daughter, Liarina. When they failed due to Argi Mirage in the Gundam Astaroth rescuing her, Gianmarco keeps Yuhana Hakuri hostage while ordering her brother Sampo to track down Liarina and her entourage.

This leads him to where they were meeting with Rosario Leone, and where his betrayal is exposed. While Argi was fighting Rosario in the Gundam Vual, Gianmarco comes to their rescue and forces the rogue banking executive to retreat.

Onboard his ship, the Mercurius, Gianmarco meets with Liarina and explains to her the situation regarding her father's assassination, the upcoming board meeting, and the future leader of Tanto Tempo. While he refuses her offer to become the head of the company, he does end up endorsing her at her suggestion.

Afterwards, he brings them to the Avalanche colony for the board meeting, and sends them off while he waits for them, giving them the chance to defeat Rosario and his Gjallarhorn reinforcements before the meeting starts. 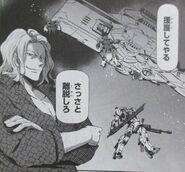 Rosario and his ship, Mercurius

Retrieved from "https://gundam.fandom.com/wiki/Gianmarco_Salerno?oldid=461955"
Community content is available under CC-BY-SA unless otherwise noted.