The Geze (ゲゼ, Geze?) is a custom mobile worker featured in the anime series Mobile Suit Gundam ZZ. The unit is piloted by its designer Gemon Bajack and former Titans pilot Yazan Gable.

A personal handmade mobile worker built and owned by junk collector Gemon Bajack at Side 1's Shangri-La colony. It is mainly composed of MS junk parts at the time of the Gryps War, high power generator, movable frame, and gundarium as part of the armor, etc. It can be classified as a second generation MS if only by the technical level, and has enough thrust to fly in a colony. However, there is no decent armament because it is specialized for work. The Geze was well-suited to retrieving trashed mobile suits, particularly due to its two pairs of manipulator arms. The rear pair of manipulators were nothing more than simple claws, good for grappling large objects, while the front pair were jointed hands used for more delicate work.

Additionally, it featured a gondola-type cockpit that could be moved along a rail that circles the fuselage, making it a convenient structure for work as well as the upper body that can be swiveled 360 degrees.

Gemon - seeking a little glory for himself - offered himself and the services of his Geze to Mashymre Cello, who had come to Shangri-La to make new allies among the spacenoids for Neo Zeon at the outbreak of the First Neo Zeon War in UC 0088. Gemon would try on several occasions to root out and destroy the AEUG flagship Argama, which was hiding in Shangri-La. However, Gemon's efforts would be stopped time and again by the MSZ-006 Zeta Gundam, piloted by the hapless but extremely lucky Newtype youth Judau Ashta. Gemon would soon bring out his second handmade Geze unit, piloted by Yazan Gable - a former Titans pilot and now Gemon's partner-in-crime, who also had a score to settle with the Zeta Gundam and the Argama. In the end, however, both men would fail in their missions. 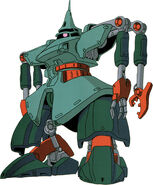