Gerald Sakai(ジェラルド・サカイ) was a mobile suit pilot for the Principality of Zeon. He appeared in the Mobile Suit Variations design series.

Born at Side 3 in UC 0049. Sakai enlisted in the Dukedom military in 0073, and later underwent preliminary pilot training at the age of 24 as a reserve pilot (designation PM0492378642A) and found himself a member of Zeon's first mobile suit corps. He received a field promotion to 2nd lieutenant during the Loum campaign. As a student majoring in engineering, he has extensive knowledge of technology, leading him to be assigned to a non-combat post as a technical officer at Granada. In the last month of the war, Sakai returned to the front and was assigned to the Chimera Corps; since he was at Side 3 when the war ended, we can assume he was not one of the Ace Corps members who fought at the Battle of A Baoa Qu. He is one of the few survivors of the Chimera Corps. During his career, he piloted the MS-06F Zaku II, MS-09R Rick Dom, and MS-14C Gelgoog Cannon. 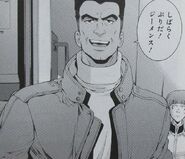 As seen in MSV-R: The Return of Johnny Ridden
Add a photo to this gallery
Retrieved from "https://gundam.fandom.com/wiki/Gerald_Sakai?oldid=430630"
Community content is available under CC-BY-SA unless otherwise noted.