George Glenn (ジョージ・グレン, Jōji Guren?) while unseen and only referred to in the Mobile Suit Gundam SEED anime, is a character of great significance and importance even long after death, as he is humanity's first Coordinator.

The first coordinator stunned the world with his numerous achievements, both in intellectual fields and physical fields. Even designing his own ship for Jupiter exploration.

Born when the world is still using the old calender, George obtained his PhD from the Massachusetts Institute of Technology (MIT) at the age of 17. Glenn had numerous achievements: he was a star athlete, an Olympic gold medalist, as well as a famous American football player. He was also an ace pilot in the Air Force, as well as having numerous achievements in the field of aerospace engineering.

Glenn would embark on the Jupiter Exploration Mission for the Atlantic Federation's FASA (Federal Aeronautics and Space Administration), on a spaceship which he designed (the Tsiolkovsky), which would take seven years. Before he embarked on his journey, he revealed a shocking truth to the people of Earth. Glenn explained that he was not born through natural means and that his genes were modified artificially early in his life. He explains that his body surpasses that of unaltered humans in every aspect-strength, intelligence, and creativity.[1]

Fourteen years later, Glenn brought back from his exploration Evidence 01, also called the "Winged Whale." It was an extraterrestrial fossil found orbiting Jupiter that proved the existence of alien life. This discovery would prompt the temporary weakening of the influence of religious extremists on the world.[1]

In the end, a Natural, who was angry that he was not born a Coordinator, assassinated Glenn in C.E. 53.[1]

Later, it was revealed that George Glen's brain was preserved in the GG Unit which was given to Lowe. Lowe then passed the CG unit to The Professor, who extracted the memory engrams and created a holographic George Glenn to serve as the ReHOME's captain.[2] 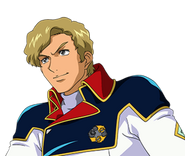 George as a child, with his mother.

George Glenn assassinated by a Natural.

George Glenn in Tsiolkovsky as seen in Mobile Suit Gundam SEED Re:

George Glenn in Tsiolkovsky as seen in Mobile Suit Gundam SEED Re: