General Garneaux is the main antagonist in the G-Saviour live-action movie.

While he appears to look after his people. The hard truth is that he is the opposite of that.

Knowing about a chemical that can help solve the food crisis, he sought its destruction in order to implement policies that involve selective starvation. He orders Jack Halle to kill the Illuminati members that invade a hydrogen rig when they come to retrieve the chemical. While Mark Curran, the protagonist, saves one member from being killed, Cynthia, the chemical’s creator, was still captured.

Garneaux later met Mark at a party and, gaining his trust, sends him to interrogate Cynthia. Around this time, Garneaux showcased little care for the people he worked for when he mocked the president and his speech. When Mark escapes with Cynthia and the chemical, Garneaux orders an investigation on the chemical. Even having Mimi, Mark’s fiance, spy on the duo.

Later towards the end of the mobile suit battle between CONSENT and Gaia, Garneaux finds out the Mimi returned the chemical to Cynthia, he orders his men to turn back so he can retrieve the chemical, but as they were piloting a Gaia ship, everyone on board, including Mimi and Garneaux, get killed when one of the CONSENT Mobile Pilots blows the ship up by mistake. 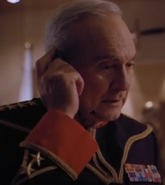 Image from the film.
Add a photo to this gallery

Retrieved from "https://gundam.fandom.com/wiki/General_Garneaux?oldid=462571"
Community content is available under CC-BY-SA unless otherwise noted.