Geera Zoi (ギーラ・ゾイ), aka Yark Dole (ヤーク・ドレ), is a character that appears in the TV series Mobile Suit Gundam AGE.

Not much is known about Geera Zoi's past, but it is known that he is an illegal arms dealer that uses the alias Yark Dole. According to Grodek Ainoa, Geera is the one who opened the port gates of Colony Angel for the Vagan forces to enter the colony.

Geera Zoi first appeared in the series to bring Desil Galette back from Fardain. He wore a hood and a mask. Geera later appeared at Mardona's Workshop and asked him to upgrade a Zedas. Unknown to the workers at the workshop, the Zedas is hidden with a pilot that later causes havoc at the workshop.

Geera reappeared again at the Battle of Ambat, foreseeing the battle from within the space fortress. When the Diva managed to break through the defenses of the fortress and crashed into the hangar, Geera took off in his xvm-gz Defurse, determined to bring down the Gundam AGE-1. Geera caught the Gundam wandering in the fortress and fought it. To be precise, Zoi wasn't sure that he could win. He knows that the Psycomet Mu-szell can utilize the X-Region of his brain, but he wonders how well the Defurse would perform in the hands of a true X-Rounder.

On first sight, Geera fired the cannons at the Gundam. This immediately pulverized the DODS Rifle of the Gundam. Geera and Flit continued the duel in melee combat. But later a vision of Yurin motivated Flit to stab the Defurse in the belly. The Defurse's engines overloaded, but Geera managed to escape in the nick of time.

While escaping, Geera ran for the nearest escape route with Flit hot on his heels. Geera reached the main control room at the same time Grodek Ainoa and his team reached it. Upon arrival, Geera took of his helmet, which gave Grodek's crew a great shock. It was the first time, the crew of the Diva found out that the Unknown Enemies are humans.

Geera then introduces the nation of Vagan and their plans to recapture a utopia called Earth. Flit raised his gun in anger and claimed that the Vagans are not humans for being so ruthless. Geera puts Flit's gun on his own head an challenges Flit to kill him. Geera's wish came true when Grodek backstabbed him by opening fire. Geera, knowing that his end is near, went to the controls to activate the self-destruct systems of Ambat. Upon completing activation, Geera receives another shot from Grodek.

Zoi "returned to Earth" upon saying these words. It is known if he died content as his eyes were closed upon death. It is not known whether Vagans believe in returning to Earth upon death, or whether Geera Zoi said it to mock Grodek.

Close-up of Geera in pilot suit 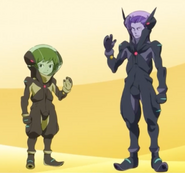