The Garuda-class is the largest aircraft ever made. It can reach as high as the stratosphere and remain in flight semi-permanently, only needing to land for routine maintenance. As such, the Earth Federation Forces devised a plan to divide Earth into six air defense zones, each with a Garuda-class assigned to it, allowing their on-board mobile suits to quickly respond to situations happening anywhere in the world.[1]

Inspired by the Gaw deployed by the Principality of Zeon during the One Year War, the Garuda-class is designed to carry 10-20 mobile suits, and similar number of subflight systems such as the Base Jabber and Dodai Kai, and if need be can carry hundreds of personnel. Although the Garuda-class is not heavily armed, the mobile suits it carries can be deployed to defend it. The plane is fitted with 20 thermonuclear jet engines and has hover nozzles for low-speed flying. The Garuda class lacks VTOL capabilities and takes off using a runway on land or from the surface of a ocean/sea. However, only a small number of airfields have runway huge enough for the Garuda-class.

A twin-barreled defensive armament, the Garuda-class is armed with two of them for anti-air purposes.

Originally used by the Temptation-class shuttle for assistance in exiting Earth's atmosphere, the Garuda-class can also attach a pair of these boosters to its wings to increase its top speed. They are jettisoned when they are no longer useable or required. Additional boosters can be carried in the plane's hangar.

The Garuda-class transport plane was in service to the Earth Federation Forces, and by extension the Titans, in U.C. 0087. Several of these massive planes were stationed at Jaburo to serve as evacuation craft as the Titans moved their military base to lure the Anti Earth Union Group (AEUG) into a trap. However, the AEUG managed to capture two of these planes, the orange-colored Audhumla and the green colored Sudori, and used them to escape.

The Titans later recaptured the Sudori, and used it to field several advanced mobile suits, such as the NRX-044 Asshimar and ORX-005 Gaplant, to harass the AEUG and Karaba. After multiple encounters with the Audhumla, the Sudori was eventually destroyed. The Audhumla was later handed over to AEUG's earth-based ally, Karaba, and Titan's Jerid Messa captained a Garuda known as the Melord in a failed attempt to intercept the Audhumla. Karaba subsequently used the Audhumla to move their personnel to Ireland.

In U.C. 0088, the Earth Federation continued to use the Garuda in the fight against Neo Zeon, using them to transport the new RGM-86R GM III. The Garuda-class was later employed by Neo Zeon during their colony drop on Dublin, carrying several AMX-009 Dreissens and the AMX-011 Zaku III. During this event, the Karaba deployed the Audhumla to combat the Neo Zeon forces and evacuate the citizens of Dublin.

By U.C. 0096, most of the Garuda-class transport planes have been lost in combat, but the original Garuda, the namesake of the class remained active and was used to transport Mineva Lao Zabi. In U.C. 0122, another Garuda-class, the Geush, was deployed as an EFF mothership during the ground campaign on Earth against Mars Zeon remnants. 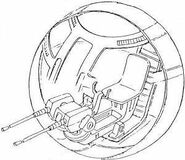 Rocket boosters in the Sudori's hangar

Base Jabber launching from a Garuda-Class

Base Jabber launching from a Garuda-Class 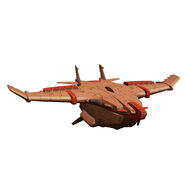 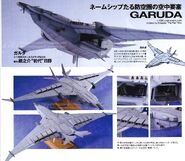