Garma Zabi (ガルマ・ザビ, Garuma Zabi?) is a character featured in the anime Mobile Suit Gundam. The youngest son of Sovereign Degwin Sodo Zabi, he commanded the Zeon Earth Attack Force during the One Year War.

Char contacted Garma, telling him the V Project had been found. While Char was unable to defeat White Base and Gundam, the battle succeeded in changing the trajectory of White Base, sending them into Zeon territory as he had planned. Garma was pleased, and prepared for Char's arrival. After the White Base made it through re-entry, the crew realized that Char had trapped them deep in Zeon territory, and off in the distance they saw Zeon forces headed by a Gaw Attack Carrier holding Garma Zabi [1].

The Komusai docked in the Gaw, and Garma welcomed his old friend Char. They discussed the White Base, and Garma relished the chance to show his worth to his older sister Kycilia. Garma sent in a force of Magella Attack Tanks on the ground, which began firing heavily on the White Base. Ree. Amuro couldn't move enough in Guntank to face the Magellas, so he went back inside the White Base to switch to the Gundam. A soldier reported to Garma, telling him that the Guntank, which they had earlier thought to be simply a tank, was indeed a new type of mobile suit. Garma thought this to be the Federation's new mobile suit that he'd heard about, and sent out three Zakus to fight them. Garma dropped the three Zakus. Char, watching, realized the mistake that Garma was making, and was happy about it because it would look worse than Char's earlier defeats, due to Garma having the bigger force. After Garma's defeat, Dozle would realize the true danger Gundam poses, and that Char's defeat was not his fault. Dren informed him that Garma was not suited up, and Char contemplated whether he would have let his old friend die in battle or save him so as to make himself look good. After Garma witnessed Amuro going berserk in the Gundam, he calmly ordered the Gaw to turn around and regroup. He was determined now to take the Gundam in one piece, and knew that to do that he needed to completely change his strategy. Garma met back with Char while he was taking a shower, accusing him of not telling him the true power of the new mobile suit, but Char replied that he told him enough, and sid he'd be honored to give him a hand. Garma thanked him once more for giving him something to prove himself to his older sister Kycilia. He left, saying that he has a great friend in Char [2].

At Headquarters, Garma looked over the that data Zeon amassed about the Gundam. He was amazed at what he saw, and realized that it was greatly superior to anything Zeon had come up with. Char entered, and Garma congratulated him for doing as well as he can. Garma and Char planned to attack before Gundam can regroup. Later, Amuro was trying to fly his Core Fighter over Zeon lines to Federation territory using an added boost from White Base's catapults. Garma and Char saw White Base bringing up its bow to allow for the necessary trajectory, and Char realized what they were trying to do. As Amuro launched, Garma and Char watched, and then Char and Dren launched in the Komusai to intercept Amuro. After the battle, Char touched down on ground, where Garma contacted him. They had discovered that the Gundam was divided in three parts [3].

When the White Base was flying over the Grand Canyon, it was flying low in order to escape the enemy radar, flying overhead. Char and Garma contemplated their action, and Char explained to Garma that the interference of Minovsky Particles would make their most powerful weapons useless. Bright made a request to Zeon for a temporary cease-fire so they could drop off civilians. Garma asked Char for his opinion on the cease-fire, and, while Char didn't like it, he knew this would give them enough time to mobilize their slower ground troops for the attack. Garma ran off to give the order, and Char smiled, thinking about how Garma was still the soft-hearted, spoiled rich kid he knew back then. As Zeon forces closed in, Garma was very happy to see what he believed would be the end for White Base. The Gunperry tht had been rigged by the crew to look battle-damaged landed. Char and Garma looked at the people who were being dropped off, but saw no soldiers amongst them.

Garma attending a party with Char in the background.

Garma Zabi and his Zaku II FS Type as seen on Gihren's Greed: Blood of Zeon 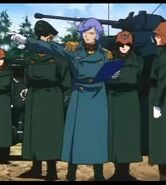 Garma's picture seen in a parody in Gintama 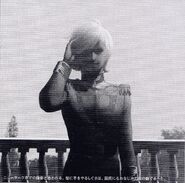 In some of the Gihren's Greed series of strategy games, it is possible to prevent Garma's death. It is even possible for Garma to break from his older brother Gihren and form his own faction, New Zeon and take his Zeon Earth Attack Force and Dozle's Zeon Space Attack Force with him, making them unavailable to the player. In the PlayStation 2 version of Gihren's Greed, Garma's fate is inevitable, though through the right choices players can prevent the deaths of Ramba Ral and the Black Tri-Stars.

Garma's death is also preventable in the PlayStation 2 game Mobile Suit Gundam: Gundam vs. Zeta Gundam. After completing Haman Karn's default timeline, One Year War Zeon pilots become playable. Keeping Garma alive in this scenario allows Zeon/Axis to return after their defeat in the One Year War with greater strength and eventually control the Earth Sphere. However, Char will eventually decide to kill Garma as usual, though this time he receives court-martial for his crime.