3
Ganota no Onna (ガンオタの女) is an adult comedy manga written and illustrated three volumes by Uroaki Sabishi, published by Kadokawa Shoten and serialized Gundam Ace magazine from 2006 till 2008.

Ganota Utsuki (pun of the title with "otaku-gan," short for Gundam-Otaku,) is a recognized Gundam-Otaku. Because her intense love of Gundam (specifically anything related to Char Aznable) she was unable to get a boyfriend growing up. Now she works as an office woman at a large and successful company in Tokyo where she has vowed to change her ways so that she could have a successful love life. Four years later and she is possibly and even bigger Gundam-Otaku.

The story is centered around Ganota, the #1 employee at her company, and her various interactions with other characters, many of whom are also Gundam-Otakus. One of the most commonly seen interactions is between her and the male lead and love interest, a capable and handsome young man who is the nephew of the company president but has a hatred of Gundam so strong it could be listed as Gundam PTSD.

Ganota Utsuki starts her new job at Zum INC and realizes that is an ideal opportunity to make a fresh start and hide one of her terrible secrets from her new work colleagues, that she is a "Gundam-Otaku". However this is easier said than done as she subconsciously starts to relapse into her old Gundam habits.

Makabe notices the growing closeness that exists between Ganota and Kishiri, and realizes that Ganota may be a potential obstacle and hindrance in Makabe plot to get Kishiri to notice her.

Makabe tries to understand why Ganota stopped Kishiri from destroying her MG Gyan and thinks that Ganota may have feelings for her and after meeting up with some friends for a drink, they convince her to use her Feminine attributes to show Kishiri how she feels.

Chapter 04 Glory to the Gun Navi

Ganota visits Blue Electronics to see some of the new products they are developing there and is amazed to see that they are developing a Gundam based Sat Nav. Instantly infatuated with the device she borrows a prototype in order to test it all she needs to find someone with a car to use it with.

At a party to celebrate Carla's recovery, Kishiri is approached by Ganota's Elite Guard. This is something that threatens to revel Ganota closest guarded secret and must take steps to ensure that her deadly secret remains undiscovered by Kishiri and her work colleagues.

Chapter 06 The Fall of a Gundam Otaku

Ganota meets up with Carla where she revels the cause of the cause of Kishiri's Gundam PTSD. As Ganota comes to realize that she and Kishiri may not be suited towards each other, she becomes incredibly depressed at the thought she has no one in her life.

Ganota is enjoying her day off, watching Mobile Suit Gundam: Char's Counterattack when she is visited by her mother, who is after a having a fight with her husband, and tries to convince her to come shopping with her while she is in town. Ganota is not interested and decides to start building a MG MSZ-006 Zeta Gundam, but as she is building it she loses one of the pieces off one of the runners and begins to desperately search for it.

While Makabe continues to work behind the scenes alongside Uraga on a secret operation, Ganota finds herself increasingly bored at work and agrees to have some fun with Carla to break up some of the boredom.

Chapter 09 A Lalah outfit made just for Lala

Namba Nal approaches Ganota about looking after a child for awhile as she can no longer cope with looking after her, However before she gets a chance to tell her how dangerous the child is they have already left. Namba remarks that this child will target only Ganota's weak points' her Gunpla specifically.

Chapter 10 Lala-chan, Show me the Path!

Ganota is woken by Lala, after she sees a cockroach, and suggests that they gas him out.

Ganota and Lala return home from shopping and are shocked to see Carla and Kishiri waiting outside her apartment, Ganota is forced to think and move quickly and hide everything Gundam-related in order to ensure her secret is not discovered.

Ganota and Lala head off to visit Makabe in hospital after she fell and broke her two legs trying to break into Ganota's apartment trying to prove that she is a Gundam-fanatic. However once they arrive they discover that some one is putting needles into her food.

Lala comes to realize that Ganota recent stint of Char' themed cooking is a result of her withdrawal from wearing her red suits to work and sets out to prove that in reality its ok to wear red out in the world without the fear of being discovered as a Gundam-Otaku.

Makabe returns to work on the day Ganota's suspension ends, so she can see the look on her face when she tells her about the Mining contract she has secured. Unfortunately her glee is short lived as she realizes that Federation Inc. has started stealing some of Zum Ins. customers in response.

Ganota goes out for the evening to meet up with Miharu, one for her old friends' get get some information about federation Inc. bid for the FX project that they are both competing for. But just as they are about to leave Miharu, informs Ganota that her brother has started working for Federation Inc.

Ganota prepare to depart for one of the Southern island's to see the test flight of the Dopp and continues to prepare some of her special incentives, but before she leaves she sets her sights on Uragan for a special mission.

Ganota is summoned to the president's office in order to get her opinion on whether she thinks they can win the FX contract. However as the meeting progresses it becomes ever more apparent that the FX contact is of little concern to her and her real goal is revealed to be that of a merger between Zum and Federation Inc.

Ganota is awoken early by a phone call from her brother saying that their father has been taken into hospital. Ganota who believes it to be a trick hangs up on him. But once she arrives at Ministry of Defense to unveil Zum Inc. entry for the FX contacts she is informed that it wasn't a trick and her father really is in hospital.

Ganota brother takes Lala back to her apartment while Ganota stays with her father a little longer at the hospital to talk. Lala who takes an instant dislike to Ganota's brother decides that she will take care of him, however once they arrive back at Ganota's home she launches an attack only to miss and break through into a hidden room.

Ganota's brother reveals how Ganota originally got into Gundam and how her obsession started all because of her first love.

Lala is sitting on some swings when Kishiri appears and ask what is wrong. Lala explains that Ganota cannot take her shopping as she cant afford it and when he sees that she has now socks he resolves to fix this, However Lala misinterprets his kindness as the acts of a Pedophile and runs off leaving him surrounded by a large group of very suspicious people.

Chapter 22 The Choice is mine!

Ganota and Kishiri are placed on an interview panel to screen potential new applicants for Zum Inc. As the interviews proceeds she realizes she can use this opportunity to prevent any additional Gandam-fanatics' from getting a job their any revealing her secret.

Chapter 23 Makabe, can you break Through!?

While Ganota is out meeting clients, Makabe uses the opportunity to attempt to charm Kishiri, only to find even when Ganota is not at the office she still leaves a lasting impression with Kishiri.

While watching a documentary on Early Christianity in Japan, Makabe devises a devious plan to reveal Ganota's hidden love of Gundam.

Ganota receives a phone call from Nimba saying that Lala's parents have finally settled into their new life and Ganota realizes that the time has come to say goodbye to Lala. However Lala cannot understand Ganota attitude to her departure.

With the news that Federation Inc. has come under investigation by the government for false claims made during FX contract. Kishiri asks Ganota out to dinner, but during he dinner he revels that that he only asked her out so he could discuss her being in charge of the hiring process for their new company "aeug", so Zum can hire some of the employees from Federation Inc that may be fired/let go due to the scandal surrounding them at the moment. Ganota feeling rejected feels that Kishiri will never be able to admit his true feelings and decides its time to leave Zum Inc.

Ganota finally awakes from her coma and leaves the hospital. As she begins to wander the streets she sees the familiar face for Carla Zabi on a TV and realizes that twenty years have now passed since her accident, but for some unknown reason she still looks the same as she did back then. 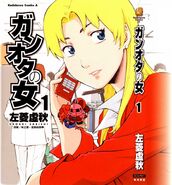