In the Finals, Gala Garla was joined by Neo Singapore's Russets Daggats in a tag team match against Neo Sweden's Allenby Beardsley and Neo Japan's Domon Kasshu. While Russets and Gala had the upper hand at first, they both eventually lost the match to Domon and Allenby.

After the 13th Gundam Fight ended, Gala returned as part of the World Gundam Federation to defend Earth from the JDG-00X Devil Gundam. 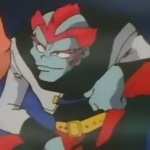 Add a photo to this gallery
Retrieved from "https://gundam.fandom.com/wiki/Gala_Garla?oldid=454869"
Community content is available under CC-BY-SA unless otherwise noted.