April 1987
Gaia Gear (ガイア・ギア, Gaia Gia?) is a story written by Yoshiyuki Tomino featuring mechanical designs by Ito Mamoru. It first ran as a serial in the Japanese Newtype Magazine from April 1987 to December 1991. Afterwards the story was released in five novels which were released from September 1988 until April 1992.

Gaia Gear is a story set in the future of the Universal Century timeline, specifically in UC 0203. Once more, the governments of Earth and its space colonies are at odds and resolve their differences with man-machines. This time the resistance group Metatron fights against the Man Hunting Attachment police force of the corrupt Earth Federation. To have better chances Metatron creates a memory clone of the legendary Char Aznable called Afranche Char, who commands the troops of Metatron and pilots the Gaia Gear Alpha.

Two hundred years have passed since people floated the islands called space colonies into outer space. During this time, several wars have occurred. It was a battle in order to protect the Earth. Amongst the twinkling of the stars, man hated one another, got hurt, and collapsed, yet did not forget love. Much blood was shed, and grief brought forth. The souls of the dead wander the silence of the universe become light and melt into the Milky Way. The immeasurable universe swallows the feelings of everyone, continuing with no change. When the Earth loses its radiance, changing the people’s prayer to sighs of grief, one soul crosses time. Perhaps that person was the harbinger who awoke for that.

Federation approves expansion of MHA jurisdiction as part of a crackdown on illegal aliens.

MHA establishes a garrison at Hellas colony in Side 2 (L4).

Afranche Char arrives in Hong Kong aboard the Spacious.

MHA begins sending its forces, including the flagship Maha Geyjis, down to the Earth. Mother Metatron pursues. Air Force team led by Afranche Char descends to the Earth.

Chapter.01 -
Afranche Char, a young boy of 19 years old, lives peacefully amidst nature on a small island in the Pacific Ocean together with his foster parent Gaba Su and his lover, Everly Key. Recently, something odd was happening to Afranche’s body. A peculiar sound is heard resonating in his mind. One stormy night, Gaba Su passes away, and with his dying breath he tells Afranche, “Go to outer space.” However, Everly absolutely forbid Afranche from trying to venture out into outer space. Amidst their arguing, Afranche discovers a huge object stretched out on the beach. The upper half of the body appeared to be like the machines of a hundred years ago. What was felt in the object? Before long, Afranche was determined to go to outer space.
Chapter.02 -
Everly restrains Afranche who still tries to persuade her. The two have begun a newly married couple life in Afranche’s house without Gaba Su. The next stormy day after Gaba’s passing, Afranche secretly leaves the island and Everly. Riding a canoe, Afranche crosses the stormy sea alone with fear and loneliness within him. The storm passes and he arrives in the island port, taking in a meal at a bar. There, Afranche becomes involved with a middle aged man and who started talking about the meaning of the name “Afranche Char.”
Chapter.03 – Lorekeeper
Chapter.04 – Sea Jack
Chapter.05 – Arson
Chapter.06 – Sieg Zeon’s Legacy
Chapter.07 – Farewell
Chapter.08 – Against the Sea and Land
Chapter.09 – Inertial Flight
Chapter.10 – Krishna Pendant
Chapter.11 – Monologue of Darkness
Chapter.12 – Ul Urian 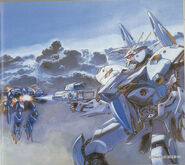 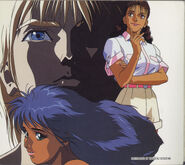 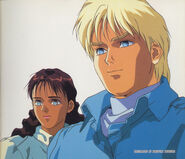 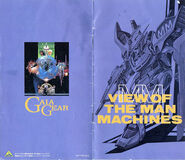 Retrieved from "https://gundam.fandom.com/wiki/Gaia_Gear?oldid=459733"
Community content is available under CC-BY-SA unless otherwise noted.