Gai Murakumo is one of the main characters in the "Mobile Suit Gundam SEED Astray" series. He is the leader of the mercenary group Serpent Tail.

Gai is a man who always keeps his cool, staying calm and logical no matter the circumstances. He, and his mercenary group Serpent Tail, are so well known among his peers that anyone who intentionally interferes with their mission, will be recognized as an enemy and eliminated on the spot. He will not tolerate any betrayal by the client, and if it is discovered, he will immediately break the contract, or in the worst case, he will try to eliminate the person as self-defense or retaliation.

A top class mobile suit pilot, Gai's combat abilities are more a result of his activities as a mercenary than of him being a coordinator. He also possesses excellent spatial awareness, which he keeps secret.

Gai was a combat coordinator created by the Earth Alliance some time before they started the Socius series. However, he was considered a failure as he managed to break free of the EA's mental conditioning and escaped. After destroying all EA Forces that pursued him, he became a mercenary. He wears tinted sunglasses at all times to cover his combat coordinator retina identification code.

Gai performs a series of hit and run attacks on ZAFT supply depots. For this mission he piloted a custom GINN that had extra large fuel tanks to increase the distance it could travel and several combat knives.

During the mission, he would face the ZAFT ace "Magic Bullet of Dusk" Miguel Aiman in his own custom GINN. Although Gai fought Miguel and damaged the ZAFT pilot's GINN he never lost sight of his true objective, and in fact most of his maneuvers were calculated to the point that he destroyed the last supply base.

Shortly after his mission to destroy the ZAFT supply bases, Gai was contracted to go to the remains of Heliopolis and destroy the remaining prototype Astray mobile suits and eliminate any witnesses.

For this mission, Gai piloted a Moebius equipped with a Gatling cannon. While searching the interior of the colony Gai came across Lowe Guele in the Astray Blue Frame. Lowe pulled off a tactic that destroyed Gai's Moebius but not before the mercenary leaped out of it. Gai was about to kill Lowe, when suddenly he had an emergency transmission from his partner, Elijah Kiel, who informed him that their employer has double-crossed them. Gai then took the Blue Frame and used it to fight off the Moebius units sent to kill Serpent Tail.

After the battle Gai intended to return the mobile suit to Lowe, but the Junk Guild tech said he could keep it for saving his team's ship. Gai thanked him but warned Lowe that this wouldn't stop him from killing the tech if it's part of his mission.

After Artemis was breached due to the destruction of its light-wave shield emitters, Gai was hired to defend the asteroid base until repairs were done. For the mission Gai, equipped the Astray Blue Frame with missile launchers and two recoilless rifles. These weapons provided a lot of firepower that used little energy from the Blue Frame's battery.

With the Blue Frame, Gai defeated numerous pirate groups, preferring to destroy their engines and weapons than outright destroying them. It was his way of leaving survivors to tell tales that Artemis was still impenetrable. However shortly after Lowe's Junk Guild team arrived in the area, Artemis launched a missile assault that destroyed the pirate ships.

Garcia than ordered Gai to attack and capture Lowe's Red Frame. Gai refused stating that the Junk Guild wasn't a threat. However Garcia had taken Elijah hostage, forcing Gai to comply. During the battle with Red Frame, Gai went easy on Lowe and captured the suit when it was low on energy. Bringing Red Frame into the hangar, Gai suspected that Lowe caught unto a hint Gai left him. Lowe did and provided a distraction that allowed Elijah to get free with Gai threatening to destroy Garcia if he didn't revoke the contract. 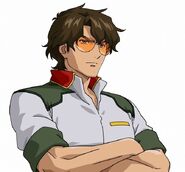 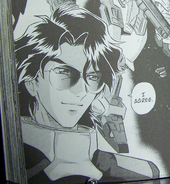 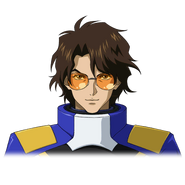 Gai and Lowe vs Gina