Gabriel Gish (ガブリエル・ギッシュ, Gaburieru gisshu?) is a character in Gundam Build Fighters Honoo Try. She is the builder and pilot of the XXXG-01Wfa Wing Gundam Fenice Azure.

A Spanish woman who is a technician at Nielsen Lab and has outstanding proportions. She is also a member of the "Lapis Lazuli", replacing other member that Lindsey Anegaozy expelled. She is a passionate admirer of Ricardo Fellini and thus her Gunpla is a replica of the Wing Gundam Fenice. 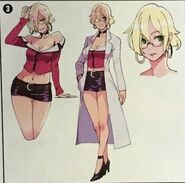