The GX-999910 Gundam X Jumaoh (ガンダムX十魔王, Gandamu Ekkusu JūMaō?) is a Gunpla appearing in Gundam Build Fighters: GM's Counterattack. Based on the GX-9999 Gundam X Maoh, it is built and piloted by Mao Yasaka.

The Gundam X Jumaoh is Mao's newest Gunpla and as implied by its name, it is developed from the Gundam X Maoh.[1][2] Technology gained from Mao's XM-X9999 Crossbone Gundam Maoh is also incorporated, and the Gundam X Jumaoh's main battle tactic is destroy enemies from afar with its heavy firepower which has been pushed to the limit.[2] Armament includes the back-mounted X Cannon, smaller beam cannons mounted all over the body, four breast Vulcans, and a pair of beam sabers which are rarely used as Gundam X Jumaoh specializes in long range combat.[2] Befitting its 'maoh' (Demon King in Japanese) moniker, the beams emitted simultaneously from the X Cannon and smaller beam cannons can destroy all in Gundam X Jumaoh's path, slicing through everything like a gigantic sword.[2]

A set of four beam cannons mounted on the back, the X Cannon is the Gundam X Jumaoh's main weapon.[2] Taking on a 'X' shaped configuration when not in use, the four beam cannons can rotate and shoot in any directions when deployed as they are attached to the Gunpla's back via arm units.[2] The blue piece on the tip of each cannon will align itself with the rest of the cannon's body during shooting.[3]

Besides the X Cannon, Gundam X Jumaoh has 17 other smaller beam cannons scattered throughout its body.[2] Movable beam cannons are located on each shoulder, forearm and side of the legs, while fixed beam cannons are located in the forehead, the palms, the front skirt armor, the side skirt armor, the knee armor and in the feet.[3] They can be fired independently or simultaneously with the X Cannon in the 'Full Burst' attack.[2] Furthermore, some of these beam cannons like the ones in the palms can be used in extreme proximity like during close combat.[2]

Four Vulcan guns mounted in the chest, they are used for intercepting incoming missiles, intimidation and to damage enemy sensors.[2]

A standard beam saber, it is weaker than the Large Beam Sword but consumes less energy. Storage location unknown.

The same large beam sword as used by the original Gundam X Maoh. It has a special plus-shaped blade and due to its large size, it is more powerful than a standard beam saber. Storage location unknown.

A powerful attack where the Gundam X Jumaoh fires its X Cannon and all the Beam Devices at once.[2][3] The single massive beam produced is almost the size of the main cylinder of the Island 3 type space colony, making it very difficult to dodge.[2][3] When Mao defeated the Gunpla Mafia member, Nenene, the words "Misaki is my life" appeared on the beam, and this may be caused by the Plavsky Particles reacting to Mao's strong feelings for Misaki.[2][3] 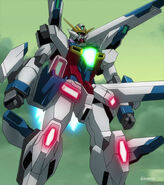 Face close up with Mao Yasaka

Retrieved from "https://gundam.fandom.com/wiki/GX-999910_Gundam_X_Jumaoh?oldid=420807"
Community content is available under CC-BY-SA unless otherwise noted.