The GX-9900-DV Gundam X Divider (aka Gundam X Divider, X Divider) is a custom version of a GX-9900 Gundam X in the After War Gundam X. It is initially piloted by Garrod Ran, but is later piloted by Jamil Neate after Garrod traded-up for GX-9901-DX Gundam Double X.

Gundam X Divider was developed from the GX-9900 Gundam X by Kid Salsamille after it suffered a devastating defeat against the RMSN-008 Bertigo. The majority of the Gundam X's equipment was heavily damaged, and it was not feasible for Kid to restore the mobile suit to its original configuration. So he opted to do a make-over, using a collection of spare parts as well as salvaged equipment he collected over the years. After he completed all major repairs and enhancements, he named it as GX-9900-DV Gundam X Divider, after its new shield.

As the Satellite Cannon was damaged beyond repair and there were no spare components, it was replaced with a new backpack. This backpack stores two large beam swords and has two energy tanks for extended flight time (one pod can last for 12 hours), as well as a storage attachment for the suit's new main weapon - the Divider. The Divider was a multifunctional shield created by Kid through the cobbling of items in his stockpile of spare parts. When mounted on the Gundam's back, the Divider's thrusters can be used for flight. It can also be handheld horizontally for the same purpose, while being used for defense. The Divider can also open to reveal six sets of triple beam cannons called "Harmonica Cannon". To replace the destroyed shield buster rifle, Kid developed the beam machine gun based on a pair of battleship-grade beam cannons. This gave the Gundam a higher rate of fire, as well as a more powerful rifle. The Gundam X Divider also retained the Vulcan guns on the torso.

The control console of the Gundam X Divider initially remained unchanged, requiring it to be piloted with a G-Controller. This was changed later as Garrod Ran went on to pilot the GX-9901-DX Gundam Double X. The control console was changed to a standard console and became the personal mobile suit of Jamil Neate. Under the control of a Newtype, the X Divider can still access its remote Bit Mobile Suits, the FX-9900 GX-Bits, through the Flash System, but due to Jamil's own mental damage, it's a unreliable ability and only exploited once.

A handheld shield that also functions as a ranged weapon and auxiliary propulsion device, it is a replacement for the Gundam X's damaged Satellite Cannon. The Divider is created by Kid Salsamille using salvaged parts from battleships and mobile suits he obtained from various places. It incorporated powerful parts such as old SRA combat vehicle-use anti-MS multi-barreled beam cannons commonly known as "Harmonica", mobile armor-use large thrusters, and the frame of an expandable shield, giving it capabilities that surpassed normal weaponry. The front of the Divider can split open along the vertical axis, revealing six sets of triple beam cannons that are also collectively called "Harmonica Cannon" in reference to their origins. These beam cannons can fire individual beams or combine their power to fire a long, curved beam. The thrusters located at both ends of the Divider can be used to increase the Gundam X Divider's mobility. The mobile suit can enter a hovering mode by docking the Divider to its back and activating its backpack thrusters as well as the shield's thrusters simultaneously. This mode enables long-range, high-speed travel and is suitable for aerial combat.

A high power beam sword made by recycling the energy condenser system and amplifier of the destroyed Satellite Cannon. A pair are stored in the backpack.

A beam rifle with two muzzles, twin sensors and triple chambers. It is developed from a pair of U.N.E battleship-grade beam cannons, resulting in high output. By reducing the time taken for charging and shortening the firing cycle, it can shoot beams at a rapid rate, hence the name 'Beam Machine Gun'.

A handheld weapon capable of firing a wide variety of ammunitions, such as torpedoes for underwater combat where beam weapons are less effective.

Modified from warships' missiles, it is stored on a specialized weapon rack mounted on the left waist.

Developed from the half destroyed GX-9900 Gundam X, the GX-9900-DV Gundam X Divider was the personal mobile suit of Garrod Ran and was used to bring down the MAN-003 Patulia. The Gundam X Divider was later used by Jamil Neate for a brief time in the Sea of Lorelie, where its Flash System was used to summon a group of FX-9900 GX-Bits to combat New United Nations Earth mobile suits. Jamil then destroyed the remaining GX Bits.

The Gundam X Divider was turned over to Jamil Neate after Garrod Ran acquired the GX-9901-DX Gundam Double X, as such was then refitted to function without the G-Controller. It served as his personal mobile suit till after the 8th Space War. After the 8th Space War, it got restored into the original form dubbed "Unit 3". 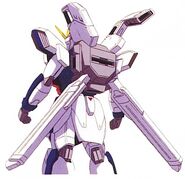 Close up of Divider's rear in hovering mode 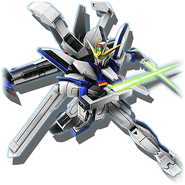 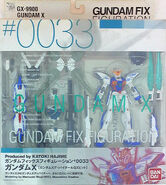 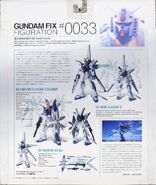