The Gundam Airmaster was one of the Gundam-type mobile suits developed by the United Nations Earth Forces during the 7th Space War, and is equipped with the same Flash System as the GX-9900 Gundam X and the GT-9600 Gundam Leopard. This allows the Newtype pilot of the Gundam Airmaster to control the FW-9800 GW-Bit units. The suit also has another unique system called the "Trans System", which allows it to transform into a fighter jet-like form known as 'Fighter Mode'. The Gundam Airmaster was lightly armed compared to the other two Gundams, its armaments consisted mainly of a pair of head Vulcans usable only in MS Mode, a pair of nose Vulcans in the Fighter Mode's nose unit, a pair of handheld buster rifles, and optional shoulder missiles. Due to the suit's transform ability, the Gundam Airmaster has superior aerial combat capability, out performing other mobile suits of the time while in the sky.

A pair of rapid-firing vulcan guns are built into the head and they are most effective in close combat. Although they have low firepower, they are still valuable weaponry for the lightly-armed Gundam Airmaster.

A pair of rapid-firing vulcan guns are installed on the sides of the fighter mode's nose unit and they are more powerful than the head vulcans. They are originally intended for dogfighting and aerial combat, but in A.W.15, they are also frequently used as air-to-ground weaponry. Although mainly used in fighter mode, it is possible to use the nose vulcans as close-range weapons even in mobile suit mode.

A pair of custom beam rifles carried by the Gundam Airmaster as its primary armament. To ensure the mobile suit's mobility, they are made of lightweight luna-titanium alloy and as a result, they only weigh about half that of normal beam rifles, while having equal, if not, higher firepower. In fighter mode, each buster rifle is attached to dedicated latch on the outside of each forearm and can be fired in this manner. In mobile suit mode, they are handheld when in use and stored on the side skirt armor when not needed.

A pair of large missiles equipped with multiple warheads can be mounted on top of the shoulders as optional weaponry. They are modified version of missiles found in old UNE weapons hangar. Once in close proximity to the target, these shoulder missiles disperse their small yet powerful warheads, ensuring a direct hit.

An unknown number of Gundam Airmasters survived the end of the 7th Space War and fell into use by various groups, eventually finding their way into the hands of pilots like Witz Sou and Linn. 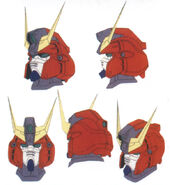 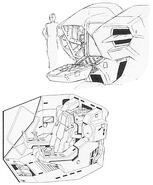 Damaged in combat with Gadeels (Ep 25)

Aftermath of battle with Gadeels (Ep 25)