The GT-9600 Gundam Leopard is a mobile suit introduced in the anime series After War Gundam X. One of these units is piloted by Roybea Loy.

One of the first in the series of Gundam-type mobile suits to be produced by the United Nations Earth Forces, the Gundam Leopard is also one of the most heavily armed mobile suits to be created at that time. In addition, the Newtype pilot that controlled the Gundam Leopard could also use the Flash System to control the FT-9600 GT-Bits to add to the suit's destructive power.

The suit's weaponry includes a missile rack in the right shoulder, grenade launchers on the right forearm, a beam knife stored in the right leg, two large leg missiles, two chest mounted Gatlings that are covered when not in use, a pair of head vulcans, a pair of head cannons and an inner arm Gatling mounted on the left side of the backpack that serves as the suit's main weapon. The suit can also be optionally equipped with a separate missile pod on the left leg, and during aquatic combat, the inner arm Gatling is replaced with an inner arm Torpedo launcher.

Unlike the other Gundams produced by United Nations Earth, Gundam Leopard isn't capable of flight. Instead, it has set of rollers in its feet, which allow it to travel at great speed. When operating in cold climate, Gundam Leopard can be fitted with a pair of Snow Dasher on the feet for moving over the snow. The suit could also be equipped with a S-1 Unit for aquatic combat.

The Gundam's main and most powerful weapon, it is a large gatling gun stored on the backpack's left side that covers the entire left arm when used. Packing firepower exceeding those of normal Mobile Suit weapons, the high-speed beams fired from the Gatling is capable of damaging heavy armor. The weapon does not hinder the MS's mobility despite its size.

For underwater combat, the beam firing mechanism of the Inner Arm Gatling can be replaced by a multi-barreled torpedo launcher.

A pair of gatling guns mounted in the Gundam Leopard's chest, one on each side. Covered when not in use, they are effective in both close-quarters and long-range combat.

A pair of homing missiles stored within the knee armor. Due to their built-in infrared detection device, they can automatically home in on their targets even in areas when radar are rendered useless.

A pair of Vulcan guns mounted in the Gundam Leopard's head.

A pair of machine guns mounted in Gundam Leopard's head, below the Head Vulcans.

A small, close combat beam weapon stored on the side of the right leg. As it consumes less energy, it can be used for a long period of time.

An optional missile pod mounted on the side of the left leg that stores 4 medium-sized missiles. Can be purged when required.

A multi-barreled torpedo launcher for underwater combat that is mounted on the tip of the optional, back-mounted S-1 Unit.

An optional compound equipment for underwater combat that is mounted on the Gundam Leopard's backpack. It is created from parts of a small submarine and is equipped with underwater propulsion device, acoustic sensor, a multi-barreled torpedo launcher, and a teardrop-shaped towed sensor unit. The S-1 Unit can be purged when not needed.

Optional feet-mounted skiing equipment that is used for engagements on snowy territory to prevent the Gundam from sinking into the snow. Used in the battles at Fort Severn.

Fielded close to the end of the 7th Space War an unknown number of Gundam Leopard units survived, only to fall into the hands of civilians or other groups. One such Gundam Leopard belonged to a woman who became friends with Roybea Loy, and eventually handed the Gundam over to him to use in his freelance career as a mobile suit pilot. Roybea joined the crew of the Freeden after aiding them a number of times, and his Gundam Leopard became part of the ships standing compliment of mobile suits.

While crossing the Pacific Ocean the Gundam Leopard fell into disuse on the Freeden, since it was not equipped for combat in water. This however was remedied by the Freeden's engineer Kid Salsamille, who was able to fit a salvaged S-1 Unit onto the Gundam Leopard, allowing it to take part in underwater assaults. This proved useful in the encounters the Freeden had with Orc vessels operation in the area. 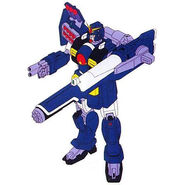 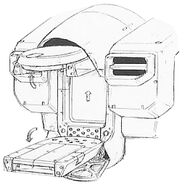 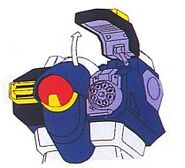 Kneeling outside a house 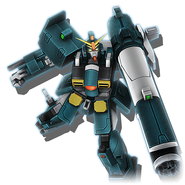